We're off to visit the Battle Field at Vicksburg tomorrow. My grandson and your 4th Great-Grandson will want to learn about how you fought for the Confederacy during the Civil War or as you would say, the War for Southern Independence.

My research shows that you, John Alexander Propes, were born in Gainesville, Georgia 29 March 1840, the 2nd of 8 sons and one daughter born to Nicholas and Mary Wilson Propes. March 10, 1862, you and brothers Rufus, Richard and Dallas enlisted in Company F, of the 43rd Georgia Volunteer Infantry. You were to serve for 3 years or the duration of the war. I wonder how long you thought the war would last when you enlisted.

The 43rd took part in both the battle and siege of Vicksburg, where you were captured July 4th, 1863 and later paroled.

We'll be looking to see if we can find the area where the 43rd stood. I wish we could talk to you about your experiences at Vicksburg and the other campaigns.

Did you really intend to just go home to Georgia when you signed the parole or did you plan all along to take a month's leave at home and then rejoin your unit? There are so many unanswered questions.

I will try my best to make sure that Cooper Charles Propes knows the story of his 4th great grandfather.

Dear Grandfather Hugunin,
My cousin Ron Pearce, one of your great-great-grandsons, sent me a photograph yesterday that I believe shows you and your wife at a G.A.R. encampment and I have been looking for more information on the G.A.R. since.

While we are marking the sesquicentennial of the Civil War, it is helpful to not only look at what our ancestors did during the war, but also afterwards. Each time the men and women of the United States have answered the nation's call to arms, they have returned to find their home communities altered in their absence as they had been altered by their experiences. They have naturally sought the companionship of others who have shared their experience. After the Civil War, Union veterans formed a number of organizations, the most prominent was the Grand Army of the Republic (G.A.R.). The organization's principles were "Fraternity, Charity and Loyalty."

In 1896, the G.A.R. Commander-in-Chief, General Lucius Fairchild, described the G.A.R. as a "Fraternity so wide-spread as to embrace all who honored themselves by enlisting in the Union Army; a Charity so broad as to have included within its benefactions sufferers of every class, and of all sections of our county."

Membership eligibility; "Soldiers and sailors of the United States Army, Navy or Marine Corps, and of such State regiments as were called into active service and subject to the orders of U. S. General Officers, who served between April 12th, 1861 and April 9th, 1865, in the war for the suppression of the rebellion, and those having been honorably discharged therefrom after such service, shall be eligible to membership in the Grand Army of the Republic.
No person shall be eligible to membership who has at any time borne arms against the United States."

I've found papers stating "Van Epps Hugunin enlisted in the 13th Wisconsin Volunteer Infantry, September 16, 1861 at Janesville in Rock County and served for three years to the end of his term of service November 19, 1864." I'm sure that your experiences during the War remained an integral part of your life and know you became a member of the Phillipsburg and then Kirwin, Kansas Chapters of the G.A.R.

This photograph is the one sent to me by Ron Pearce. (Ron, thanks for sharing it!)

The date is estimated from a reunion souvenir in the possession of your great-grand-daughter Betty Werst Cone.

The "History of the Grand Army of the Republic" by Robert B. Beath published by Bryan, Taylor and Company in New York, 1889 is available on-line at http://www.archive.org/stream/historyofgrandar00beat#page/n9/mode/2up
It is a treasure trove of portraits and biographies of the men integrally involved in the G.A.R. movement to that date. As the Union veterans aged, the leadership of the organization evolved from those who were senior officers during the war to those younger men who enlisted as privates but rose to leadership roles during peacetime.

I'll try to write more about your experience during the war soon.

Dear Grandpa Kelly,
I hope you don't mind my calling you Grandpa. My husband is your grandson Edward William Kelly born in Philadelphia ten years to the day after you died. You were only 42, that's way too young to die, and left behind a wife and six children. My husband's parents divorced when he was about 10, and he did not have much contact with his father, your son Edward Ebert, after the split. We had never seen a photo of you until your daughter Dot's son Dan Foley gave us one this summer.

From your World War I draft card, we know you were born on 15 Oct 1896. We also have a physical description. The registrar described you as brown haired, brown eyed, of medium height and slender. You had no physical disqualifications.

We know you were working as a shipbuilder at Hog Island in Philadelphia and you were already married to Alice Mae Hanna. You were also living on N. Conestoga Street in Philadelphia, the same street where you were living at the time of your death. In the 1920 and 1930 census, your occupation is listed as tapestry weaver.

You were the fourth child of John Joseph Kelly and his wife Mary Gertrude Carroll and you grew up in what today is called the "Carroll Park" neighborhood of west Philadelphia, a predominantly Irish enclave. Yes, Carroll Park is named for your grandfather, but that is a story for another time. Your father worked as a bartender at the family saloon at 5535 Haverford Avenue started by your grandfather Samuel Lawrence Kelly.

We were hoping that your death certificate would clear up some of the family stories about how you met your demise. Some have said that you were the victim of an automobile "hit and run", others that you were involved in a bar-room brawl (perhaps at the family saloon) which spilled out into the street. Unfortunately, the death certificate did not provide the answers we were hoping for. They held an inquest as to the cause of your death and declared "injury to head received in unknown manner. Found lying in the street in front of 610 N. 55th Street on 17 Sep 1939." You were no more that six blocks from home and less than three blocks from the saloon. What a shock it must have been for your wife and children. We don't have any information about how they were notified. Alice provided the information for your death certificate.

Your grandson had a career in the U. S. Navy, which took us all over the country and the world. We've moved more than 20 times. I'm certain that seems as foreign to you as living your entire life in a 10 square block area of Philadelphia seems to us. We will continue to search for information about your life and share findings with the clan you left behind. 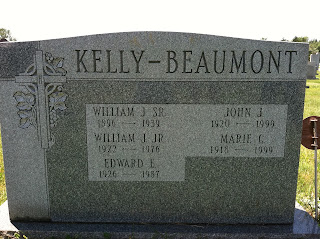 Today you rest at Holy Cross Cemetery in Delaware County, Pennsylvania with your daughter Marie, her husband John J. Beaumont, and your sons William and Edward.

We wish you peace.

Posted by Cecily Cone Kelly, One Bad Apple Genealogy at 9:07 PM No comments: