The Pratt surname is of English origin according to http://selectsurnames.com/pratt.html website it comes from the Old English praett, meaning trick or cunning. It may have been the name given to a jester or other jokester. According to select surnames, "The earliest citing of this name was Lefwinus Prat around 1080."  Others believe that "pratt" meant meadow. So Samuel Pratt would have been Samuel from the meadow.

The first Pratt ancestor of which we have much knowledge is my 9th great grandfather, Rev. William Pratt. Fortunately, we share this ancestor with a large number of members of the LDS Church. The Jared Pratt Family Association website http://jared.pratt-family.org/general_histories/pratt-family-in-england-movie.html has posted a two part video on Rev. Pratt, a Cambridge University graduate and Puritan minister, was the Rector of the church at Stevenage, Herts, England for 30 years. I hope many of your descendants will take time to look at both videos.

Their first common ancestor is John Pratt known as "the blacksmith" however, Jeremiah is descended from John Pratt's first wife Mary Andrews, daughter of Mary Chandler and William Andrews. Jennet is descended from John Pratt's second wife Hannah Williams. I believe, having consulted the charts from http://www.searchforancestors.com/utility/cousincalculator.html that Jennet and Jeremiah are 2nd cousins 1 time removed. Certainly far enough removed for there to have been no impediment to the marriage.

Together Jeremiah and Jennet added 11 more Pratts to the family tree. She died on the 4th of July 1849 at age 82 and is buried at the Pratt Farm Cemetery about 2 miles from the Village of Burlington, Otsego County, New York. Jeremiah lived to age 99 and is buried in the same cemetery.

Later this spring I will make a trip to Charleston, South Carolina for a reunion with my husband's U. S. Naval Academy company mates. We will take a couple extra days to as my children would say "add a dead people tour" to our trip. In preparation for the trip, I've been going over my research on the Huguenin/Hugunin family who arrived in Charleston 22 December 1732.

Today while volunteering in the Montgomery County Library Genealogy section, I came across the book,, "The Huguenots of Colonial South Carolina" written by Arthur Henry Hirsch, Ph. D. and published by Duke University Press, Durham, North Carolina in 1928. Dr. Hirsch writes about the French settlers who came to Purrysburg, South Carolina and identifies them as having come from Switzerland but regarding themselves as French having fled from their estates in France to the relative safety of the Swiss mountains after the St. Bartholomew's Day massacre of Protestants.

The name of ship carrying these settlers to Charleston is not included in the information but Dr. Hirsch found the following French and Swiss listed ( in french):

They were bound for Purryburg, a new settlement laid out on the north bank (South Carolina side) of the Savannah River. In addition to the plots reserved for the settlers, 300 acres were set aside for a Church and Cemetery and 100 acres for a common and a glebe. A glebe is an area of land usually set aside to support the minister. Last year I posted a drawing from the South Carolina archives that laid out the plots (please see posting of 13 April 2012).

I have only seen secondary sources of the lists of these settlers to Purrysburg. Most list David Huguenin's wife as Susanna Jacot. This is the first I've found listing her surname as Seccot. Perhaps this additional name will help researchers locate additional information about her.

No grave has been found for David Huguenin, who is listed in the 1743 South Carolina census. Probably he is buried in the cemetery at the now abandoned Purryburg.

Posted by Cecily Cone Kelly, One Bad Apple Genealogy at 3:39 PM No comments:

Origin of the name Mehitable

People are wondering about the origin of the name Mehitable. I believe it is biblical,
from Genesis 36:39, "Balalhanan the son of Achbor died, and Hadar reigned in this stead, the name of his city being Pau; his wife's name was Mehetabel, the daughter of Matred, daughter of Mezahab."

I imagine there have been many spellings. The name was fairly common in Puritan New England and I have nine other Mehitables in my family tree. One of them, Mehitable Spencer (abt 1640-1691) married our original Cone immigrant, Daniel in 1661. She was the daughter of Gerard Spencer and his wife Hannah Hills. Born in Lynn, Essex County, Massachusetts; she moved with her family to East Haddam, Connecticut where her father was one of the original proprietors along with Daniel Cone. Mehitable and Daniel raised a family of nine.

Some believe that women named Mehitable were often given the nickname "Hettie". I don't have any information to substantiate this.
Posted by Cecily Cone Kelly, One Bad Apple Genealogy at 1:19 PM 1 comment:

Today's family surname is YOUNG.  This name is undoubtedly of English or Scottish origin. It probably referred to the younger member of a family to distinguish the father from the son. My 5th great grandmother was Mehitable YOUNG.

Mehitable is one of my brick walls (that's genealogy parlance for dead end). She is mentioned in
"Thomas Sanford, the emigrant to New England: ancestry, life and descendants, 1632-4: sketches of four other pioneer Sanfords" written by Carlton Elisha Sanford published by The Tuttle Company in Rutland, Vermont in 1911. She is listed as the wife of CAPT. JOSEPH SANFORD.

Mehitable was born in Long Island and married Joseph Sanford 07 Mar 1769. The Sanford genealogy lists her death date as Mar. 11, 1835, aged 88 years. that would place her birth about 1744. That calculation would indicate that she was approximately the same age as her husband who was born
28 Jul 1745 in Milford, Connecticut.

The five year gap between Stephen and Edmund is probably due to Capt. Sanford's service in the
13th Regiment of Connecticut during the Revolutionary War.

I have not been able to locate Mehitable's burial place. I imagine that she is buried in the Morris Burying Ground near Litchfield, CT. There is a Joseph Sanford buried there with the same death date as our Joseph. 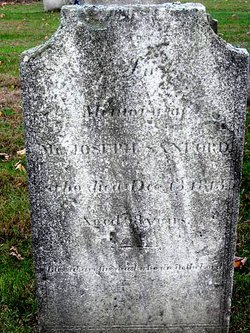 This photograph from http://www.findagrave.com/cgi-bin/fg.cgi?page=gr&GSln=Sanford&GSfn=JOseph&GSbyrel=all&GSdyrel=before&GSst=8&GScntry=4&GSob=n&GRid=78577429&df=all&
is of the tombstone I think may be Joseph's. A transcription from rootsweb lists information taken from "A Record of Inscriptions upon the tombstones in the towns of Litchfield & Morris Connecticut by Charles Thomas Payne published in 1996 by Heritage Books of Bowie, Md. Page 220 lists the inscription as "In / Memory of/ Mr. Joseph Sanford/ who died Dec 13, 1813/ Aged 68 years.

Mehitable, I am still looking for your parents. For the genealogist there is always more to explore and to find.

Dear Grandparents,
Traveling has put me behind in writing to you. I will try and catch up this weekend. The first two posts in the Surname Saturday Topic focused on names that are found at the beginning of the alphabet. After additional consideration, I've decided I really should alternate between the beginning and end of the alphabet so those of you whose names come at the end to not have to wait so long.
Today, I am writing about the surname Ysselsteyn. I believe that the "y" in Dutch is pronounced as a long "i" perhaps my sister Trude, who lives in Amsterdam can provide some additional information on the pronunciation.

I have not found an immigration record for Marten. In 1908, Frank Allaben writes in his "The Ancestry of Leander Howard Crall",  "Marten is first heard of in this county at, or near Fort Orange, now Albany, then a small settlement of about 200... Marten's patent bears (the) date June 66, 1664, afterwards confirmed by Gov. Nichols.... He became one of the original settlers and one of the fourteen original proprietors of Schenectady. His lot or portion was known as No. 8 and lay West of the Ryer Schermerhorn farm. After residing in Schenectady for about six years, Martin sold his bouwery or farm Oct. 23, 1668 to Claes Fredereckse Van Vetten and Cornelis Cornelise Veilne for three hundred and thirty beaver skins. (page 377).

It is Allaben's conjecture that Marten may have arrived in New Amsterdam as "early as 1659 and probably several years before."

Marten's wife was Mayke or Maria Cornelise who Allaben states was born in Zarrevelt. No one has yet found a marriage record for the couple in Holland nor New York records. It is assumed that after leaving Schenectady, the couple went to Claverack, New York. Allaben found their joint will filed
on the "12th day of January, 1676-7 on file in the office of the Clerk of Albany County Notarial Papers, Co. Clk's Off., Albany Co., Vol. 1 (18)", page 606. He notes that the original is in Dutch.

For family members our descendant from Marten is as follows:

Next time we visit Holland, we will have to take a side trip to IJsselstein. There is a castle and Dutch Reformed Church which date back to the time Marten lived there.

Last week when I introduced Surname Saturday, I started at the beginning of the alphabet with an English 6th great grandfather. Today I'm staying in the same generation but switching to the German side of my family.  Johannes Nicholas Adam and his wife Maria Juliana Schweickhardt immigrated from Wurternberg, Germany in 1727 with son Jonas Paul.  Some researchers report that they came on the Ship William & Sarah from Rotterdam via Dover, England landing in Philadelphia on the 18th of September.  I need to do some additional research to verify that fact. They settled in Cocalica, Lancaster County, Pennsylvania and may well have been among the many Amish and Mennonite families that settled and even remain in the area to this day.

One of the interesting facts about this family is that they are from the Cannstatt area in Baden-Wurttemberg, Germany very close to the area near Stuttgart where my family lived from 1992-1994. Sure wish I had known about them at that time, it would have been great to do the research there.

There is much more research to do on this family, and I hope to getting working on it again soon.