Dear Grandmother Lydia,
I want to update you on my search for additional information on Theodore William "Trit" Clarke. In several of his letters home, Trit writes that he can not come home to visit as he can not afford to "be thrown out of a situation which in my present circumstances I can not well afford to lose. I am engaged in the telegraph office in this place (Brownsville, Nebraska Territory) and am getting to be a first class operator. I am very pleased by the situation and have as good prospects as any young man could wish." (Letter from Brother Trit (Theodore W. Clarke)  to Sister (Mary Elizabeth Clarke) dated Dec. 18th, 1860 in the possession of Cecily Cone Kelly).
In a letter written to you on March 24th , 1861, he replies to your request that he come home,
"Well the reason I do not come is not because I do not love home and all its associations for I do but I am making money here and you who know my circumstances at home so well would hardly advise me to come back without being at least a little better off than when I went away."

Could Theodore Ford, born about 1838, be the same person as Theodore William Clarke, son of Lydia Hornell Clarke and brother to Mary Elizabeth "Molly" Clarke? Further searching lead me to a marriage recorded in White Lake, Oakland County, Michigan. 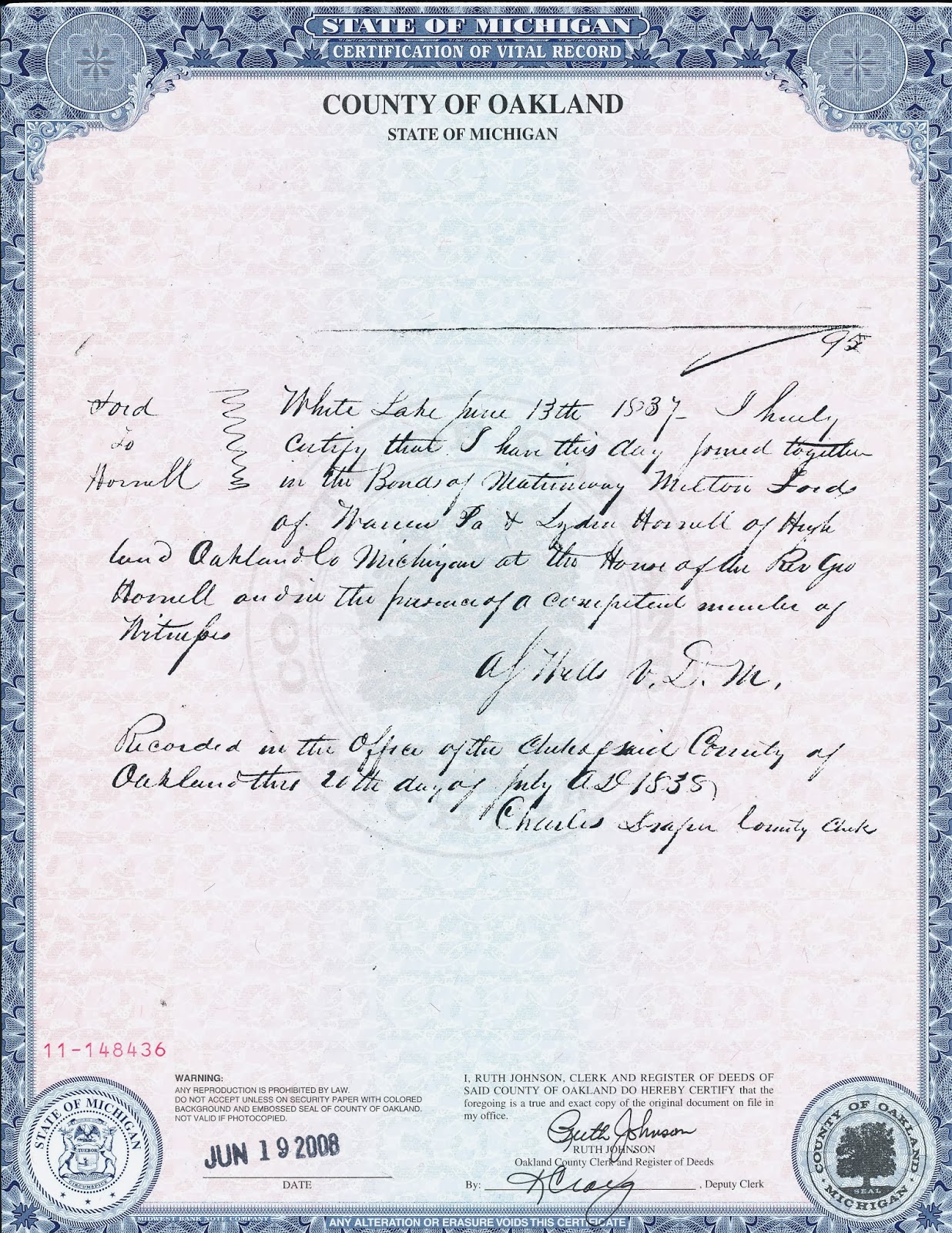 This certified copy was obtained by me on Jun 19, 2008 from Oakland County. It reads, "White Lake June 13th 1837- I hereby certify that I have this day bound together in the Bonds of Matrimony Milton Ford, of Warren Pa & Lydia Hornell of Highland Oakland Co Michigan at the home of the Rev. Geo. Hornell and in the presence of a (?) number of witnesses.   Signed A. F. Wells, V. D. M.

Recorded in the office of the clerk of said County of Oakland this 20th day of July  A. D. 1838,
Charles Scafer, County Clerk.

Did Theodore stay with his grandparents after you married John Champion Clarke October 2, 1845? I'm sure he and Hastings were inseparable and I suppose the grandparents thought it would be a good idea for the newly married couple to have some time to set up housekeeping. Did Theodore come to live with your family before George Hornell died in 1855? He is clearly using the Clarke name in the letters he writes home in 1860. Was he adopted by John C. Clarke? There are so many questions I would like to ask. Theodore's letters make it clear that he loved both his mother and sister dearly. Perhaps, it was the absence of his birth father that made him so determined to succeed.

I continue to look for clues about Theodore's life, his adventures laying the telegraph lines in the Nebraska Territory and his service with the First Nebraska Infantry. I still hope to discover where he is interred.