Could it be more than 5 generations....

When I wrote my earlier post on five generations of family members having visited USS Constitution, I addressed my letter to Grampa Colby, my great-grandfather William Wallace Colby. On further reflection, I have to wonder if the tradition might stretch back further generations.

Grampa Colby's mother, Fanny Hutchison Hunnewell (1838 - 1920) was the daughter of Samuel Bradley Hunnewell and his third wife Martha Lord.  They were married in Boston 01 Feb 1832 by Rev. William Jenks, D.D. In the marriage record, they are both described as being "of Boston".
Martha's parents Jonathan Lord and Martha "Patty" Sawyer were both lived in Boston and were married there 15 Nov 1803.
It could well be that any and/or all of them were familiar with the USS Constitution. Jonathan and Patty Lord may well have been on hand to celebrate the ships triumphant return to Boston following her defeat of HMS Guerriere August 19, 1812.

Always more to research.
Posted by Cecily Cone Kelly, One Bad Apple Genealogy at 10:06 AM 1 comment:

Dear Grampa Colby,
Yesterday the news featured video footage (moving pictures) of the USS Constitution under sail in Boston Harbor. It was the first time that the ship had been underway since the sail commemorating its 200th birthday in 1997. By the way, those planes above her, which must look strange to you, are the U. S. Navy's Blue Angels Flight Team. I was reminded of the photographs we have of you, Mr. and Mrs. George Snow and your granddaughters Betty and Helen Werst onboard "Old Ironsides" during the ship's visit to Portland, Oregon in 1933. I expect your daughter Grace Colby Werst was with you taking the photographs. 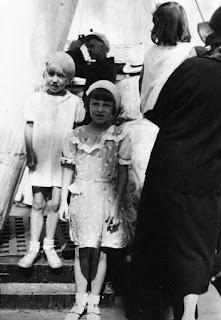 Helen, age 5 on left and Betty, age 7on right onboard USS Constitution,
Notice sailor in the background.
﻿

There is no date on the photograph, but from the brochure I found on the Internet (a new fangled research tool, as a former teacher you would love it). The information in the brochure states that ship was in Portland from August 2 to 22nd as part of her west coast tour. 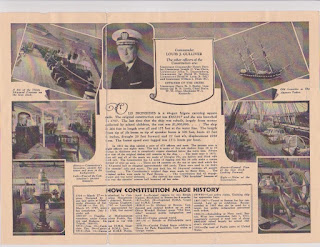 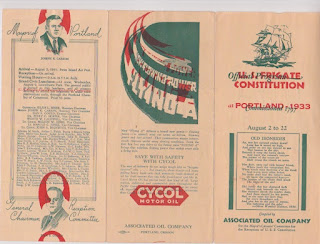 The USS Constitution Museum http://www.ussconstitutionmuseum.org reminds us that the ship set sail on July 2, 1931 for a three year, three-coast tour around the United States. The cruise was a "public thank you to the men, women, and children who, from 1925-1930, helped raise over $985,000 to completely restore the ailing ship." I'd like to think that you were among the people who raised the funds for the ship's restoration.

Oh, I hope your granddaughters were well behaved on this outing. The trip made a lasting impression on them and they have related the story of seeing "Old Ironsides" to their children and grandchildren.

This summer, my husband, daughter Amanda (your great-great-granddaughter) and I were able to visit the USS Constitution in Charleston harbor. That makes five generations of our family that have visited "Old Ironsides" a tradition we hope lasts several more generations. 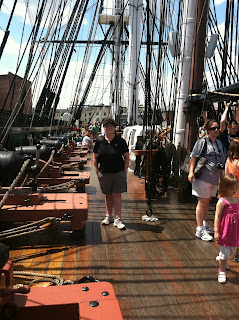 Posted by Cecily Cone Kelly, One Bad Apple Genealogy at 9:44 AM No comments:

Dear Great Grandfather Clarke,
I found what we would call your Civil War Draft registration today at www.ancestry.com. 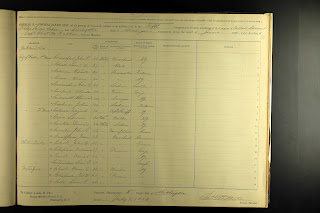 This is a photograph of Schedule II, -Consolidated List of all persons of Class II, subject to military duty in the 5th Congressional District of Michigan. You are listed as residing in White Lake, number 14 on the list; Clark, John. C. age in July 1863 is 43, a merchant born in Conn. The date on the document is July 1, 1863.

I expect that your registration was matter-of-fact for you. After all, your were rated as Class II. Class I comprised all persons subject to do military duty between the ages of twenty and thirty-five years, and all unmarried persons subject to do military duty above the age of thirty-five and under the age of forty-five. It was probably seemed unlikely that you, as a married man with a daughter, and already 43 would be called to serve.

Still I imagine just the requirement that you register sent chills through the minds and hearts of your wife Lydia Hornell Clarke and your daughter Mary Elizabeth. They were still in deep mourning for your step-son Theodore W. Clarke, aka, Theodore W. Ford who had died in the Camp of the First Nebraska Regiment just six months before.

Wish I talk with you to discover your feelings about the War and the Union cause.  From Theodore's letters home, I know he felt that he was taking part in the great fight against slavery. Did his death shake the family's determination? It was such an defining event in Molly's life that she made certain that her brother's letters were saved. Most of them have been passed on to me, your 3rd great-granddaughter.

Posted by Cecily Cone Kelly, One Bad Apple Genealogy at 9:13 PM No comments: