Today we celebrate the 224th anniversary of your birth. While celebrating today, we really wish we had the opportunity to talk with you. There are so many unresolved questions about your life.

We believe we have identified your parents, Andreas Werst born about 1763 in Northampton, Pennsylvania. No surname has been discovered for his presumed wife and your mother Catherine. We have no birth certificate for you but we would not expect to find one for the time and place where you were born. The date comes from family records. We have found a record of your baptism at the Friendensville Lutheran Church in 1794.

Since your father's will was written in German, we imagine that German was the language spoken in his home. It must have been your first language. We believe you must have also spoken English as your wife Nancy Carr seems to have been of Northern Irish heritage and would not have spoken German. Your family was either Lutheran or Reformed. Both congregations shared the same building and their records have been combined.

We know you served your country as a private during the War of 1812. You served with Capt. Robert McGuigan in the 123rd and 81st Regiments of the Pennsylvania Militia, Commanded by Lt. Col. James Montgomery. Your wife, then widow, Nancy (Carr) Werst applied for a widow's pension 23 March 1857.  Nancy said that you were disabled in 1814 and discharged at Danville, in Northumberland County. Were you wounded or injured in an accident? We just do not know.

The Pennsylvania Archives contains the following letter from Capt. McGuigan to the governor.


We know that your company was ready to go early in the war. At the outbreak of the war Northumberland county sent Captain Robert McGuigan's company and the Warrior Run Rifle company, Captain William McGuire, to join the troops at Erie and they served in the Black Rock Campaign. (Major William P. Clarke, Official History of the Militia and the National Guard of the State of Pennsylvania, 1909, P. 94).

Nancy also added that you were married by the Rev. John Bryson, Minister of the Gospel in December 1819. John Bryson was a Presbyterian minister who's ancestors immigrated to Pennsylvania from the north of Ireland but who were of Scottish descent. Perhaps Nancy's family were also Scots-Irish. We believe her father's name may have been Joseph Christopher Carr because of the name given your eldest son.

We do not know why you moved to Neave Township in Darke County, Ohio. We do know that you lived there in 1840.

The family is still living in Ohio in the 1850 census, but must have moved shortly after to Wabash County, Indiana where two grandsons were born in 1852. Your story ends in Wabash County, where you died 20 April 1855 and were buried four days later.

There is so much we still need to learn about your life. Rest assured, we are still looking for answers to our questions. Any hints you could send would be greatly appreciated!

Dear Grandparents,
On a recent trip to Massachusetts to celebrate my sister’s 65th birthday, we had the opportunity to see the home of our 10th great grandfather Jonathan Fairbanks. The cold, wet day could not deter us from walking around the house. We don’t normally expect to find such an old house, still standing.The Fairbanks House is indeed special.


“The Jonathan Fairbanks House in Dedham, Massachusetts, is one of the most important historic houses now standing in the northeastern part of the United States. Its value to the area and to the nation as a whole lies not so much in its claim to being the oldest house in New England but in its Architectural significance… It may be said quite simply that no other house of the mid-17th century in New England has survived in such unbelievable unspoiled condition. It is extraordinary that so early a structure should preserve such a high percentage of original features. It is a veritable store-house of information concerning the small handful of houses which survive from this early period.”

The center section of the house is the oldest. The east and west wings were added in the eighteenth century. Timbers for the Fairbanks house were sent to England for dendrochronology testing which dated the wood sent at 1641. Family lore says that some of the boards and much of the furniture original to the house was imported from England.

One of the secrets to its survival, is that the house was passed down and occupied by the Fairbanks family until the early twentieth century. The Fairbanks Family in America still owns the property and opens it for tours Wednesdays thru Sundays from May 3rd to October 29th. Because of the timing of our visit, we were not able to see the inside of the house but we will certainly schedule a return visit at a later date.

So how are we related to the Fairbanks family? It is not a surname that most of our family remembers. Here is our connection to Jonathan and Grace (Smith) Fairbanks. Maiden names are indicated by parentheses.

The Fairbanks and allied families are from the West Yorkshire area of England primarily around Halifax. It has been a center of the woolen industry since the 15th century. It is said that Jonathan was a weaver and merchant of woolens.
Map of West Yorkshire, England from www.wikipedia.org 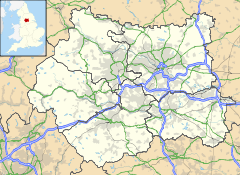 Jonathan and his wife Grace (Smith) arrived in Boston sometime in 1633. No record of his immigration naming the exact date or ship has been discovered. By 1636, he and his family relocated to the newly founded town of Dedham, Massachusetts. The men founding the community were asked to sign the following Covenant:

According to the Dedham Historical Register Volume II, published in 1889, page 153, Jonathan Fayerbancke was among the signatories to the above covenant. He also received 12 acres of land among those he built his home. It would be interesting if neighbors signed such covenants today.

Jonathan was admitted a free man in Dedham 23 March 1637-38. Certainly the Fairbanks family were Puritans but Jonathan seems to have had some doubts about how the faith was practiced. When he made his declaration of faith, it was noted that he had “long stood off from the church upon some scruples about public profession of faith.” His concerns were resolved when he became a member of the First Church in Dedham 14 June 1646. His faith would have been considered to be Congregationalist.

The death of “Jonath. Fairebanck” was reported as 5 Dec., 1668 in “The Record of Births, Marriages and Deaths, and the intentions of Marriage in the Town of Dedham, Volume 1, page 11. He was buried in the Old Burying Place in Dedham. No headstone survives to this day and it is unknown if there was ever a marker on his grave.
Photograph of the Old Burying Place in Dedham is from Bill Boyington from www.findagrave.com used with permission. 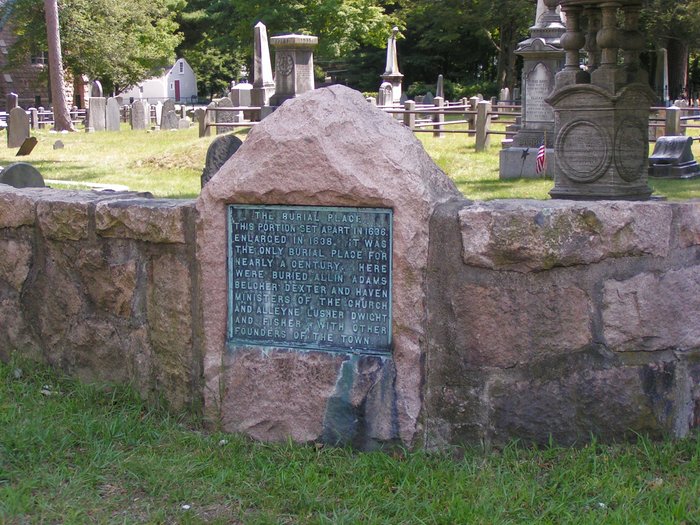 Jonathan Fairbanks left a will that was probated 26 January 1669. He mentioned his wife Grace and children John, George, Jonas, and our 9th great grandmother Mary (Fairbanks) (Metcalf) Smith. His will is marked with an ‘x’ and it is unclear if he was illiterate or just too weak at that moment to sign. I may discover more when I visit the inside of the house!     Love, Cecily
Posted by Cecily Cone Kelly, One Bad Apple Genealogy at 7:26 AM No comments: