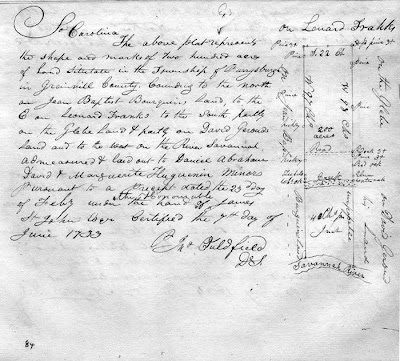 Doing the Genealogy Happy Dance after finding this in the South Carolina Digital Archives.

David Huguenin (age 60) and his wife Susanne Jacot (age 47) and their children Daniel (age 14), Abraham (age 10) and Marguerite (age 12) are found on "A list of the Germans and Switz Protestant under the Command of Collo Purry qualified before his Excellency Robert Johnson, Esquire, Governor of this Province on the 22 and 23 days of December 1732" at Charles Town, South Carolina.

David purchased land and made certain that it was listed in the names of his children so they would have assets if anything were to happen to him soon after their arrival in South Carolina.  Transcribing the above:

"So. Carolina. The above plat (pictured to the side) The above plat represents the shape and marks of two hundred acres of land situate in the Township of Purrysburgh Grainsvill County. Bounding to the north on Jean Baptst Bourgoins land, to the E on Leonard Franks to the South partly on the Glebe land & partly on David Geroud Land and to the west on the River Savannah. Admeasure & laid our to Daniel, Abraham and Marguerite Huguenin Minors pursuant to a receipt atede the 23d day of Feby under the Honorable the hand of James St. John, Esqr. Certified the 7th Day of June 1733.
B. J. Ouldfield, DSL"

We do not know exactly when David (circa 1735) and Susanne (circa 1743) died but Abraham and his brother Daniel have moved north to New York sometime between the 1743 census of South Carolina Colony where they are reported in Purrysburgh and Abraham's marriage to Christina Van Valkenburgh in January 1747.

The youngest son David, stayed in South Carolina and around 1782 purchased Roseland Plantation a property that had been confiscated from a Tory after the Revolutionary War. Members of the southern branch of the Huguenin family still own this property.