Dear Dad,
It's been 20 years since Rusty and I watched you breathe your last. Not a day goes by that we don't miss you. Ed took your great-grandson Cooper Charles Propes to get a big boy haircut today. I know you would be excited that Charles is his middle name. You would have a great time with him and with your other great-grandson Kermit Alexander Dominguez. What fun you would have visiting him in Japan, especially because you did not get to make that trip when Ed and I lived there.

All in all, I think you must be very proud of the careers and progress your children have made since you left. We are still spread out, from Japan, to Colorado, to Texas, to Maryland, to Amsterdam but try to get together as often as we can. Next weekend, Rusty, Trude and I will travel to Golden to spend time with Mom and Peg. You will certainly be in our thoughts and we will toast you more than once.

﻿﻿﻿﻿﻿ Had to include one of my favorite photos of you and Grace on the farm as today is her birthday. Oh, how much we would love to hear your wonderful, deep voice again.

Posted by Cecily Cone Kelly, One Bad Apple Genealogy at 8:33 PM No comments:

You would be 110 years old today. I imagine what a joy you brought to your four older sisters. I expect you were all born at home on the farm outside Kirwin, Kansas and next door to the farm where your maternal grandparents had settled about 1879.  As your sisters were 15, 14, 12 and 11,
they were very involved in your care and doted on you. I remember that you told me that they called you "Ticky" because you were always so busy!!

Your family moved to Pine Lawn Farm, just outside Newberg, Oregon when you were nine, leaving behind in Kansas your two oldest sisters. Ethyl had married Ira King in 1908 and Edythe was teaching school.


Besides time spent in Corvallis while a student at Oregon Agricultural College (now Oregon State), in Pendleton living with sister Madge, in Spokane with husband Cecil O. Werst, and Seattle after Cecil's death, Pine Lawn Farm became your home for the rest of your life. We all know how much the farm meant to you and your daughters and grandchildren. You would be pleased to know that the property remains in family hands more than 100 years after your father purchased it. 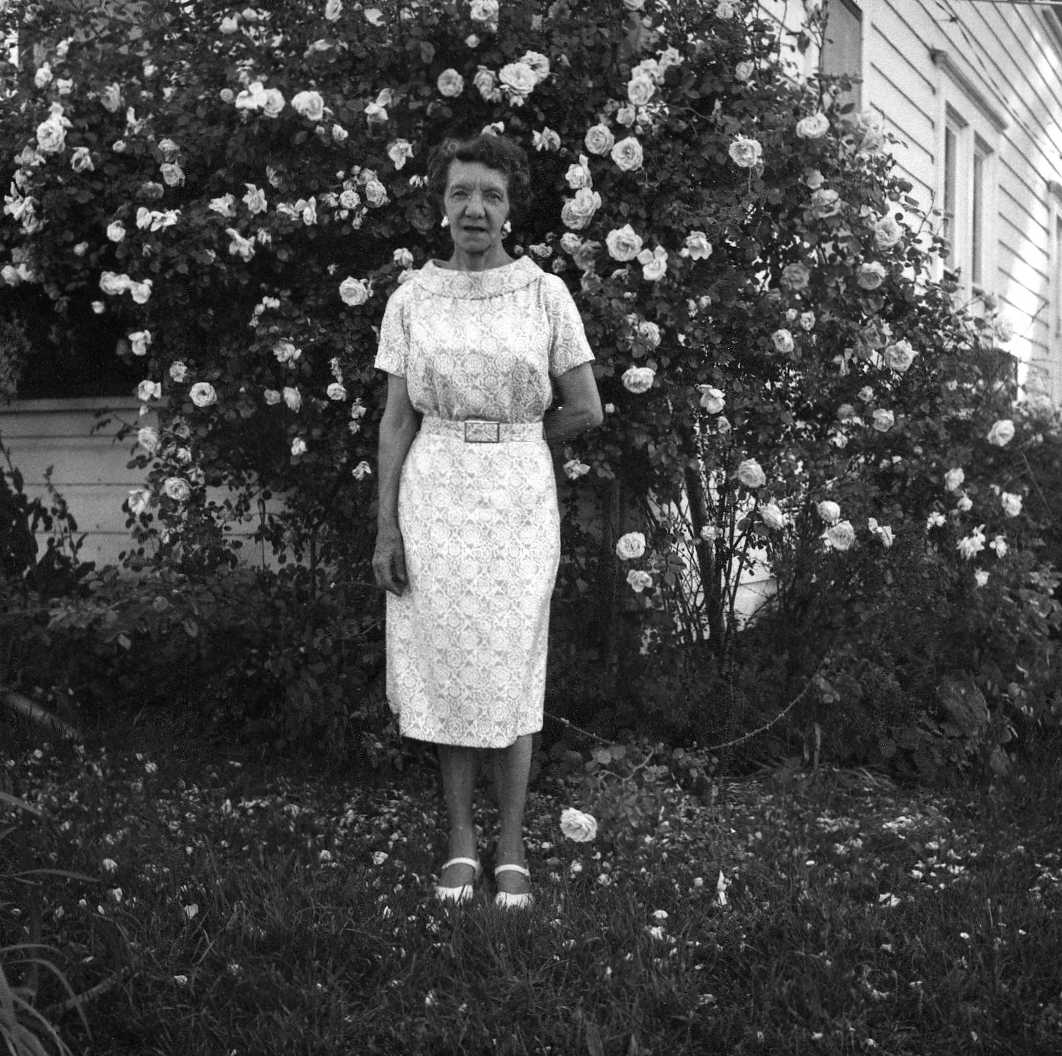 Grace Colby by her favorite Rose Bush
at Pine Lawn Farm about 1966
﻿
﻿
﻿
﻿This is one of my favorite photographs of you and how I remember you.
Love,
Cecily
Posted by Cecily Cone Kelly, One Bad Apple Genealogy at 3:13 PM No comments:

Genealogists expect to find illiterate farmers in their family trees, after all the majority of the population well into the 19th century were illiterate. So it is fun when one finds evidence of early literacy and property ownership.

SALE OF A FARM, HOUSE, LOT AND GARDEN BY THE
ADMINISTRATORS OF THE ESTATE OF PHILIP
HENDERICKSZ TO CORNELIS VAN NES
472 Conditions and terms upon which the administrators of the estate of Philip Hendericksen intend to sell at public auction to the highest bidder the farm, house, lot and garden of the aforesaid Philip Hendericksz brouwer, at Schaenhechtade, consisting of a lot of about 25 morgens, or as much as shall be allotted to the other inhabitant of each lot.
First, the aforesaid farm or lot shall be delivered to the buyer at once, and that in such magnitude as told above, all plowed land, of which a portion was seeded with 9-1/2 schepels of winter wheat, 2-1/2 schepels of summer wheat; further, the house and lot, 200 feet square in size with the garden as it lies within its fence, together with a barn, long 30 feet and wide 24 feet, except for the side aisle, two hay barracks, the on a 4 and the other a 5 - post hay barrack, a passable wagon and a span of ropes with a rear plow.
Payment shall occur in good whole merchantable beaver skins, and this in three installments. The first installment on the 15th of July of this year anno 1664, the second on the 15th of July anno 1665, and the third or final installment the 15th of July anno 1666. The buyer shall be obliged to furnish two sufficient sureties at once, one for all and each as principals, to the satisfaction of the sellers. If the buyer cannot furnish the aforesaid sureties in the aforesaid time, then the aforesaid shall be reauctioned at his cost and charge, and whatever less it comes to be worth, he shall be obliged to make good, and whatever more it becomes worth, he shall derive no profit from it. The auction fees shall come to the buyer in payment as before.
(473) After auctioning Cornelis van Nes remained the final bidders for the farm for the sum of one thousand two hundred and eight-seven guilders according to the above condition; for which said sum Volckert Vanssen and Jan Dircksen van Eps stand as sureties and principals according to the aforesaid condition. Done in the village of Beverwijck the 29th of April anno 1664.
Cornelis van Nes
Volckart Jansz
Jan Diercksz van Eps
Acknowledged by me, (unsigned) perhaps Johannes Provoost, clerk who signed the previous entry.
﻿


SALE OF A HOUSE AND LOT BY THE ADMINISTRATORS OF THE
ESTATE OF ANDERIES HERBERTSEN TO CORNELIS VAN NES
Conditions and terms upon which the administrators of the estate of Anderies Herbertsen, together with Cornelis van New, husband and guardian of Marritje Damen, each participating for one half, intend to sell at public auction to the highest bidder a house and lot located in the village of Beverwijck; adjoins to the north of David Schuijler and to the...
I, the undersigned Jan Dircksz van Eps, remain the buyer and bidder of 3 horses, a cow with a calf, and a 2 year old heifer, and 5 hogs, amounting to the sum of seven hundred and thirty-four (guilders) for which we, Cornelis van Nes and Pieter van Alen, stand sureties and principals in order to pay and satisfy the buyer, the aforesaid some. Done in Beverwijck the 29th f April anno 1664.
Jan Diercksz van Eps
Cornelis van Nes
Pieter van Alen
SALE OF A HORSE MILL BY CORNELIS VAN NES
TO JAN DIRCKSZ VAN EPS
Appeared before me, Johannes Porvoost, clerk of the court of Fort Orange and the village of Beverwijck, Cornelis Teunissen Bos, who in the presence of the afternamed witnesses declares to convey, as he hereby does, to Jan Dircksz van Eps, the horse mill which he has bought at public auction from the administrators of the estate of Philip Hendericksz; which the grantee accepts, and this for the same price as he has bought the same, amounting to one hundred and twelve guilders, to be paid in beavers, according to the conditions. Renouncing, moreover, all claims and demands he has therein. Thus done in Fort Orange, the first of May anno 1664.
Cornelus Teunissen Bos
Jan Diercksz van Eps
Acknowledged by me
J. Provoost, clerk.
Jan Dierkse van Eps came to New Netherlands with his Mother Maritie Damen and step-father
Hendrick Andriese van Doesburgh and sister Lysbet van Eps. settling in Beverwijck or beaver town (now Albany) about 1650. He married in 1666 Elisabeth Janse Douw and settled in Schenectady where they raised six children. He was a Lieutenant in the militia that was suppose to protect the settlement. He was killed by the French and Indians in a massacre at Schenectady 08 Feb 1690.
The English took over the New Netherlands Colony from the Dutch in 1664, but Dutch was still the primary language for many years. It is clear in these entries that the Dutch are using the common middle name patronymics to indicate their fathers. Jan Diekse van Eps is the son of Dirck van Eps.
﻿
﻿
﻿
Posted by Cecily Cone Kelly, One Bad Apple Genealogy at 7:05 PM No comments:

I have not been posting much for awhile. I've recently returned from a family vacation and research trip to Ireland and am in Salt Lake City taking a wonderful Advanced Irish Research Methodology class from David Rencher through the British Institute. The course is terrific and there is so much to learn.

Most of my husband's father's line, solidly Irish with one renegade German, were famine era immigrants. Kellys, Hannas, Coyles, Rileys all came to Philadelphia in this time period. Only their Carroll line was here before.

Today I've been reading "The Destitution Survey: Reflections on the Famine in the Diocese of Elphin" edited by Rev. Raymond Browne published in 1997. The reports recounted are more than chilling. From 1845 to 1850, Ireland lost 20% of its people to death and immigration. In some areas, the totals were closer to 40%.

One of the most poignant parts of the book is a song by John Mannion written for the 150th anniversary of the Famine.

Did you stay in Ireland?
Couldn't you leave your native ground?
Did you shelter in the hedge row
When they burned your cottage down?
Did they take you to the Workhouse
for to work and wait and die?
And in some unmarked graveyard
did they pile your bodies high?

Or is it by the roadside
that your weary bones remain?
Did you try so hard to make it
but you efforts were in vain?
And as you lay there in the ditches
did your people pass you by;
they had not the strength to help you
or they would surely try.

Did you make it to the harbour,
get out on the sea,
live in filth and squalor
in the hope of being free:
And when you'd almost won your battle
with the ocean, foam and wave,
did the fever come and take you
to a watery grave?

Or were you one that made it
to the other side,
and spent your life-time mourning
for the ones you left behind:
And did the four wind take you
to the corners of the Earth,
with nothing left but memories
of the county of your birth?

I've found the immigration record for the Kelly family who arrived in Philadelphia on June 6, 1846 Lawrence and Susan with sons Samuel and Michael and daughters Susan, Margaret and Mary plus three boxes of belongings. I can't help but wonder how many people were in the family before the famine hit in 1845 or how many they left behind.
Posted by Cecily Cone Kelly, One Bad Apple Genealogy at 5:13 PM No comments: