Looking for more information about training at Chanute Field, Illinois circa 1937

Dear Poppy,
How well I remember you showing us photographs that you had taken during your training at Chanute Field in the 1930s. I believe you stopped there when you drove back from attending my wedding in Annapolis in 1971. Peg found a box of old photographs yesterday, some that we never recall seeing before. They have raised lots of questions about the nature of your training. 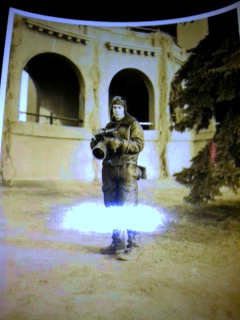 There is not much information about the training that went on at Chanute Field between World War I and II. If I remember correctly, you were training as a combat photographer. We believe that you are pictured in each of these photographs. We certainly recognize your very precise script on the lower one.

After Chanute, I believe you went to March Field near Riverside, California. I know that you were released for the training to come home and assist your father on the farm. You appear in the photographs to be in uniform. So was there an enlistment in the fledgling Army Air Corps? Were things so bad in the U. S. Army, that they just let people out? This was the middle of the depression and still six years before Pearl Harbor. Did you have to apply for a hardship discharge?

Growing up, I had the impression that you were drafted during World War II, but I have found a record that shows you enlisted on 13 Sep 1943 in Portland, Oregon. Your enlistment papers mention one year of college as well as 'skilled photographic process occupations' but no previous service. The 1943 Portland City Directory lists you as a Machine Operator working for USAE and residing in Newberg. I believe that USAE is an abbreviation for U. S. Army Engineers.

Wishing we could talk to you about your training. Not much has been written about the technical training that went on between the wars.

Posted by Cecily Cone Kelly, One Bad Apple Genealogy at 3:35 AM No comments:

Dear Grandparents,
In researching your lives, I have learned to explore all leads and to never be surprised at the direction from which they come. Today while reading the weekly online newsletter from the New England Historical Genealogical Society entitled "The Weekly Genealogist", I found a column by Assistant Editor Valerie Beaudrault. Her article, "Spotlight: Various Resources: Wisconsin, Oregon, and Illinois" mentioned that the Wilsonville Public Library in Clackamas County, Oregon has made their Northwest Heritage Index available on its website. The collection contains more that 16,000 obituaries.

I know that several of you already know where this discussion is going. A quick search of their data base revealed obituaries for Chas. S. Newton in 1912 and Mrs. Newton in 1929. As soon as I found those listings, I contacted the library and after sending the information from the Northwest Heritage Index, I promptly received pdf files of the obituaries. Many thanks to Librarian Greg Martin for his help.
﻿﻿
The image is difficult to read so here is the transcription:
"Chas. S. Newton died at the home of his son, John R. Newton, at 9:40 p m, Wednesday. Mr. Newton has been very low for several weeks and but little hope was held for his recovery. He was born in New York and was 70 years old at the time of his death. He is survived by his wife, one son, John R. Newton, and two daughters, Mrs. R. N. Cone, of Springfield, Utah and Mrs. H. H. Hart, of Whit(e)s Plains, New York. The funeral will be held from the home of John R. Newton, Friday April 5th at 10:00 a. m.

Previously, I had found an obituary for Great Grandfather Newton in the General Catalog of Officers and Students for the University of Michigan in 1912. Charles Shepard Newton had been at student at the Ann Arbor campus from 1860-1862.

It is interesting that the Canby notice mentions that the funeral would be held from the home of his son John R. Newton. Since Charles Newton had been an elder in the Presbyterian Church, I had expected that your service would have been held at a church. Perhaps, a church in Canby was not available at the time.


When I requested the obituary listed for Mrs. Newton, I was crossing my fingers that this referred to Great Grandmother Mary Elizabeth Clarke Newton. The dates seemed to be correct but then Newton is a fairly common surname. I knew I had the right person, when the obituary stated that she had died at the home of her daughter Mrs. Cone of Salem.
Because the image is difficult to read... here is a transcript of the article:
"Former Canby Woman Buried Here Thursday
Mrs. Newton, former resident of Canby, who died at the home of her daughter, Mrs. Cone of Salem, was buried at Canby Thursday, and Interment was in Zion cemetery where her husband was buried some time ago. Mr. and Mrs. Newton formerly owned a place that is now the Fir Lane Poultry farm, property of Mr. and Mrs. W. H. Thompson. They made a specialty of strawberry production years ago."
Wow.... strawberries! Not what I expected from an Oregon farmer. It will take some additional research to determine where the farm was located.
Love,
Cecily
﻿
Posted by Cecily Cone Kelly, One Bad Apple Genealogy at 7:02 PM No comments:

Dear Grandparents,
Today is the 110th anniversary of the birth of Lawrence Bud Satterwhite, my son-in-law Chris' maternal great grandfather. He was the second son of William Dempsey and Fannie Bailey Copeland Satterwhite and was born in Rosston, Nevada County Arkansas. Satterwhites had been living in this area of Arkansas for more than fifty years.

Looking at the 1910 and 1920 census for the Satterwhite family, shows a growing family living on a farm in rural Nevada or Hempstead County Arkansas. The family grew to include four sons and two daughters. The enumerator only reported the type of farm as general, but we can imagine that all members of the family spent a good deal of time helping with the chores around the farm.

The family made their home in Little Rock, where Lawrence worked as a carpenter or a mechanic.
I imagine they were renting homes as the Little Rock Directories for 1925,  1928. 1929, 1930 list them at different addresses.  Perhaps, they bought the home at 3710 W. 11th Street as they are listed there from 1930 to 1934. The house is listed on Zillow as having been built in 1930, so perhaps they had the house built for their family.

Perhaps Chris' grandmother could explain why her father moved his family to Longview, Texas about 1935. In the Longview Directory, Lawrence is listed as a carpenter joining his brother C. L. (Copeland) in the community.

Lawrence spent the remainder of his life in Longview. Rosa died in 1974, and he married Walterene R. Rodgers.  He died of prostate cancer 20 Mar 1991 at the advanced age of 87.  He is buried at Memory Park Cemetery in Longview with his first wife Rosa.

Happy Birthday Lawrence! or did they call you Larry or Bud?

Dear Grandparents,
Today we will be celebrating the 237th anniversary of our Declaration of Independence. Traditionally, we observe the date flying the flag, watching parades, family picnics and ending with fireworks. We will be gathering at my daughter Colby's with 3 generations of family and friends. Ed and I have been marinating chicken, making macaroni salad (wish I could talk him into BBQ salad), angel food cake in preparation for this evenings dinner. Before we go, I wanted to take a minute to thank you for all the sacrifices you made in establishing this great nation.

I have been able to identify some of you who served in the Revolutionary War. I'm certain there are others who's records I have not discovered yet (all hints) are appreciated.

Evert Van Eps - Captain of Bateaumen on Lake George, wounded at the Battle of Oriskany, captured by the British at the Battle of Johnstown, NY and taken as a prisoner to Canada. Not released until the Treaty of Paris was signed.  (Ancestor of Grace Colby Werst). 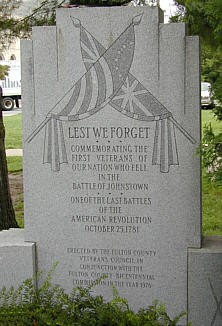 Eleazar Warner - Captain in the Connecticut Line, responded to the Alarm at Lexington, fought at the Battle of White Plains. (Ancestor of Charles Newton Cone).

Samuel and Richard Hunnewell - Participated in the Boston Tea Party. Richard then served as a private in Capt. Winthrop Baston's Company. (Ancestor of Grace Colby Werst).

John Dye - Served as a Captain in the New Jersey Militia. (Ancestor of Hazel Allen Cone).

Magdalena Domain Schlechty - As a widow provided monetary support for the cause. (Ancestor of Cecil Oscar Werst).

We salute your sacrifices and hope to learn more about your lives.

Love,
Cecily
Posted by Cecily Cone Kelly, One Bad Apple Genealogy at 10:46 AM No comments: