Dear Grandparents,
Today I'm beginning a new feature on this blog, "Surname Saturday". Most of your descendants know the surnames of their grandparents and even great grandparents, but not back much farther. Each week I am planning on introducing a different surname with this feature (which is suggested by geneabloggers) including some information about the ethnic origin of the name, the arrival in America and the connection with our family tree.

Starting at the beginning of the alphabet seemed easiest.... ABBOTT

The ABBOTT surname is of English origin. Philip's great grandfather George Abbott was born about 14 June 1615 in Hertfordshire England.  According to "Immigrants to America before 1750" edited by Frederick Virkus and available at www.ancestry.com, George Abbot immigrated to Massachusetts in 1647. Family members believe that the immigration was as early as 1643. 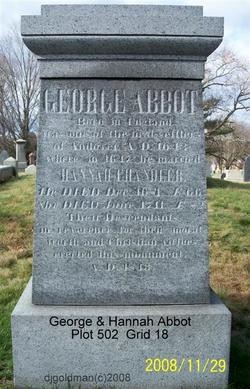 This photo of George and Hannah Abbot's headstone was posted by an anonymous record and is Find A Grave Memorial #8797002 http://www.findagrave.com/cgi-bin/fg.cgi?page=gr&GRid=8797002 . They are buried in the South Church Cemetery in Andover. I believe the stone was added by family members in 1843. The stone reads, "George Abbott Born in England, was one of the first settlers of Andover A. D. 1643 Where in 1647 he married Hannah Chandler. He died Dec. 1681 age 66. She died June 1711 age 82. Their descendants in reverence for their moral worth and Christian values erected this monument A. D. 1843."

Dear Grandmother Newton,
A belated Happy Birthday, meant to get to this on your birthday yesterday but my husband and I were on grandson duty. My grandfather, your husband's name sake, Charles Newton Cone remembered you as being very stern with him. I imagine he was all over and into everything just as Cooper is.

I have many of the letters your brother Trit (Theodore W. Clarke) wrote home from laying telegraph wire in the Nebraska Territory and then from service in the Civil War with the First Nebraska Infantry. His tender concern for his little sister comes across clearly in many of his letters. He was so concerned that you find a suitable man for a husband.

From everything I've read in your notes and letters that have survived, I think Trit would have liked Charles Newton. Perhaps, he even knew him. They clearly express your love for Charlie. Faith and family seem to have been most important to you.

I imagine you were still active into your 80s as my grandmother carefully noted in my Dad's (Charles Newton Cone, Jr) baby book that you had given him a hand knit sweater. How wonderful that you knew many of your great grandchildren.

When I look at your photograph, I see a brave and determined woman whose life took her from Michigan, to the prairies of Minnesota, to the wilds of Utah and finally the orchards of the Willamette Valley in Oregon.


You should know that you have left behind a large clan of brave and determine women (and men).
Happy Birthday!

Dear Grandfather and Grandmother Hugunin,
An entry in your family bible, which was inherited by my mother Betty Werst Cone, gives 08 Jan 1865 as your wedding date. The entry does not specifically state the location but I imagine it was either at the home Grandmother Hugunin's parents, Newsom and Elizabeth Jones Gibson, at Edgefield, Tennessee or at a local church. Today Edgefield has been absorbed by Nashville and only a few old historic houses remain.

I do not know how you two met. I imagine the attractive, Southern girl catching the eye of First Sergeant Van Eps Hugunin as he is garrisoned in the area with his unit the 13th Wisconsin Volunteer Infantry. The Regimental History of the 13th, has them in Edgefield on picket and guard duty from the end of October 1863 until February 1864. Did you meet during that time period?  Van Eps' father Richard Hugunin died 15 Dec 1863 in Janesville, Wisconsin. Was Van able to return home on emergency leave so he may have been away part of the time.

The Regiment was sent home to Janesville for thirty day's leave at the end of February returning to Nashville on the 31st of March and made their camp at Edgefield. Your granddaughter, my grandmother Grace Colby, recounted stories of Grandmother Hugunin calling her a Southern lady. I wonder how your family felt about your relationship with a Yankee.

I believe that believe that Grandfather Hugunin left with the rest of his Company B comrades for duty guarding the Tennessee River between Stevenson and Decatur. By June, they were in Clayville, Alabama assigned to build structures to prevent the rebels from crossing the river and interfering with Gen. Sherman's communications. Grandfather Hugunin was mustered out of the Regiment on November 21st, 1864 in Nashville.

Had you already decided to marry when his term of service was up? I believe he and a partner started a general store. So perhaps you waited until January to marry so he could get his store opened. The 8th of January 1865 was a Sunday. Was your wedding ceremony part of Sunday church services or a quiet ceremony at home? There are so many questions I wish I had the opportunity to ask.

From all I've read and researched, your marriage seems to have been happy. My grandmother always said that Grandfather and Grandmother Hugunin adored each other. I'm sure it was so.
Happy Anniversary!

P.S. When expecting my first child, I looked through family names and selected Amanda, only knowing that Grandmother Hugunin's maiden name had been Sarah Amanda Gibson. It was not till I visited the cemetery in Phillipsburg and saw on her headstone S. Amanda Hugunin that I realized you had gone by Amanda. So you have a third great grand daughter namesake who is thirty-one. 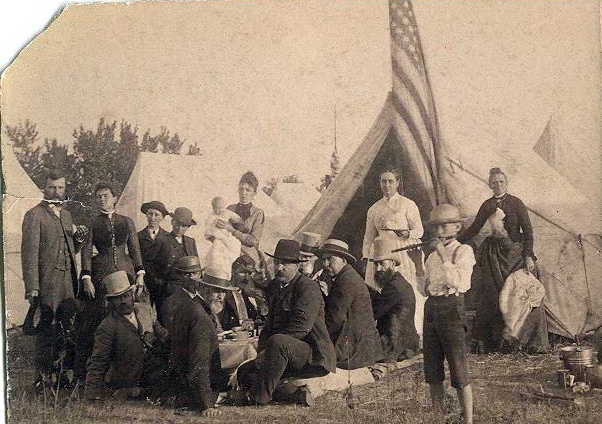 Van Eps Hugunin and wife S. Amanda Gibson
are the couple standing to the far left in this
photograph of a  GAR (Grand Army of the Republic)
encampment in Kansas, date is unknown.﻿
Posted by Cecily Cone Kelly, One Bad Apple Genealogy at 7:38 PM No comments:

Dear Grandmothers Lydia and Molly,
Today is the 150th anniversary of Theodore William Clarke's death. I imagine it was several weeks before your received the letters from John Gillespie, written from the "Headquarter 1st Nebraska, Van Buren, Mo." informing you or your son's and brother's passing.

I'm sure you would be pleased to know that the letters Theodore "Trit" wrote home to you both have been carefully preserved by your descendants. I received them about twenty-five years ago from my grandfather, Charles Newton Cone. The letters were carefully tied with faded blue ribbon, some still in their envelopes. They are a lasting testament to how much Trit meant to you both.

The date of the last letter (I have) that Trit wrote to you was December 8th, 1862 from the
"Camp of 1st Neb, Patterson, Mo." He is writing a quick note before going to bed after a busy day because "We are to march in the morning for the land of Dixie."  He goes on to explain his duties which have him delivering orders from Brigade Headquarters to the various regiments. He does not know their destination but imagines that it will be Little Rock, Arkansas. He seemed full of confidence that the Union forces would continue to beat the rebels.

Though I only know Trit from his letters, I feel as if I can somewhat appreciate your loss. Each time I read the forty+ letters that I have, I am impressed by his tender concern for his little sister Molly and his Mother. I want you to know that I have been searching for more information about him. Unfortunately, over the years, there have been some mistakes made in official records. Some list him as William Theodore Clarke and others as Theodore William Clark. It is also somewhat complicated by another William Clark in the Regiment.

The letters written you by Capt. Thomas Majors and Sgt. John Gillespie are addressed from Van Buren, Missouri. I have visited Van Buren, looking for Theodore's final resting place. I was not successful, but hope to continue the search later this year.

There are so many questions I know you could answer for me about why Theodore left Michigan, the circumstances and dates of his birth. I can only estimate from census records that he was born about 1838. I want you to know that I will be dedicating some time and effort during this 150th anniversary year of his death to find some more information about Trit and his life. If I can not located his grave, I think I will have his name added to or a headstone erected in White Lake, Michigan with his grandparents. I hope you will approve.

Happy New Year!
Among my resolutions for 2013, is to post more frequently here. Our New Year's included keeping Grandson Cooper over night so his parents could celebrated their 7th wedding anniversary. Hardly seems as if it has been that long. Colby and Cooper joined us for dinner and we had my Grandmother's Steamed Pudding with the Cottage lemon sauce for dessert. 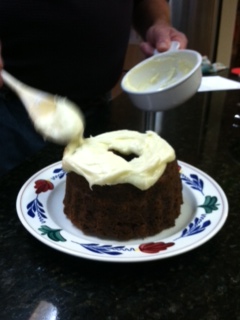 The photo shows Ed pouring the lemon sauce over the pudding. It tasted good, though I think there is some difference between today's baking soda and yesteryear's as it could be tasted in the pudding. Perhaps one just needs to cut back.