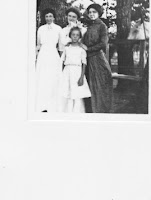 Today is February 29th or Leap Day, a once every four years occurrence, it is also the 144th anniversary of my Great Grand Mother Mary Elizabeth Hugunin Colby's birth. Mamie Lizzie or just Mamie, as she was known to family and friends, was born in Edgefield Junction, Davidson County, Tennessee on February 29th, 1864. Today this area has been completely absorbed by Nashville, but during the Civil War it was an important railroad hub and the site of a battle. This is an important consideration in Mamie's story as it is the central reason for her birth in Edgefield Junction.

(Above photo is Mamie on the left with her daughters in back Madge and Pansy, my grandmother Grace is in front). The photo was taken at Pine Lawn Farm just outside Newberg, Yamhill County, Oregon in 1911 or 12).

Her mother, Sarah Amanda Gibson's family had been in the area since the early 1800s.
According to the Hugunin Family Bible Sarah Amanda's father Newsom Gibson was born in Davidson County 13 April 1817 and her mother Elizabeth Jane Jones was born in Tennessee 2 May 1821. Their parentage remains one of my most frustrating dead ends or genealogically speaking "brick walls." They married in Davidson County 29 Dec 1840.


Mamie's father was Van Epps Hugunin. He was serving as 1st Sgt with the 13th Wisconsin Infantry Regiment that was garrisoned in Edgefield Junction following the battle. I imagine they met during the course of the Union troop occupation of Nashville. Van Epps was mustered out of the Army on Nov. 19th, 1864 and he and Amanda married Jan. 8, 1865. Van Epps and a partner set up a Mercantile in the Edgefield Junction area and the couple planned on creating a life there. Mamie was born there in 1868.

Most of us do not remember that the Nashville area was the birthplace of the Klu Klux Klan. In addition to targeting the black population, they also targeted Northerners who were living in the south. I imagine that is what drove the family north. In the 1870 census they have returned to Johnstown, Rock County, Wisconsin which was Van Epps' home. His mother, Janet Van Epps was still alive and she entertained Mamie with stories of her father Evert Van Epp's service during the Revolutionary War. Mamie later told these stories to her daughter Grace Colby.

Southerner Amanda was not happy in the harsh Wisconsin winter. The family moved on to Kirwin, Phillips County, Kansas before May 1879. They established a prosperous farm about 2 miles out of town and became involved in the community. Living on the next property was a young William Wallace Colby who had come from Cuba, Lake County, Illinois to help his widowed Aunt farm.

They married 16 Oct 1884 in Kirwin but not before he had passed his 2nd grade teacher's examination. He later became superintendent of schools in Phillips County. Mamie also became a teacher as did their daughters Ethel, Edythe and Pansy.

The family left Kansas to go to the 'milder' climate of the Willamette River Valley in Oregon in 1911. The milder climate was supposed to be better for Mamie's health. Today we suppose that she suffered from poly cystic kidney disease as did three of her daughters, her brother Walter and several of Walter's children.

My grandmother described her mother as tall and thin, very much a proper but not prim Southern Lady who loved to cook and entertain. She had a wide circle of friends and their home was the center of their social circle. The family made a big deal of the leap year's when they could really celebrate Mamie's birthday on the 29th.
I've been lucky enough to end up with Grace Colby's recipe box and notebook which contains many of her mother's recipes with notations. I'm including a recipe that would make a great cake to celebrate Mamie's 144th birthday tomorrow.

Chocolate Potato Cake
(Mama's 1917 this is my grandmother's notation)

(I imagine this should be poured into greased and floured cake or loaf pans).


Boil until it forms a ball in cold water "softball stage". Beat until thick enough to spread.

HAPPY BIRTHDAY MAMIE! Your family has not forgotten you.
Posted by Cecily Cone Kelly, One Bad Apple Genealogy at 3:15 PM