A few days before we will celebrate Thanksgiving, we pause to remember that we owe our lives to intrepid ancestors who were willing to take huge risks to settle in an area that was largely unknown. We have many ancestors who came on ships but today I will especially be remembering those who came on the Mayflower 400 years ago.

My 10th Great Grandfather, William Bradford was one of the religious separatists that fled England for Holland and then Holland for America. William was born around 1590 in Austerfield, Yorkshire, England. His father died when he was an infant and he was raised by older relatives. He was among those imprisoned in Boston, England during their first attempt to escape to Holland. Records from Leiden list him as a fustian maker (a maker of cotton cloth). On November 15, 1613, he married Dorethea May whose father was among the religious separatists. She died in Cape Cod harbor December 7, 1620 slipping on the Mayflower's icy deck and falling in to the water. How sad to have survived the difficult voyage only to drown before setting foot in the new world.

Bradford married second Alice (Carpenter) Southworth a widow who came in 1623, it is said, in response to a letter from William proposing marriage.

William Bradford became one of the leaders of the Plymouth Colony, serving as its Governor for nearly 30 years. Much of what we know about their life in Leiden, in the colony and of the Mayflower's voyage comes from his account entitled Of Plymouth Plantation. Below is the first page of his manuscript: (from  https://en.wikipedia.org/wiki/Of_Plymouth_Plantation#/media/File:Of_Plimoth_Plantation_First_1900.jpg) 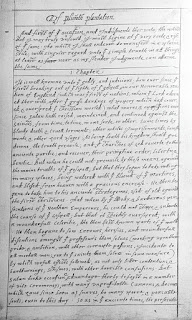 My 11th great grandparents William and Mary (unknown) Brewster also came on the Mayflower. They were among the older religious separatists. William was born about 1566 in Nottinghamshire, England. According to Bradford, he attended Cambridge University. He then entered the service of William Davison, Ambassador to the Netherlands and afterward Secretary of State to Queen Elizabeth I. Brewster became Postmaster at Scrooby. This office was rather more involved than today and included occupying Scrooby Manor and entertaining royalty and church prelates. It was through Brewster's friend Sir Edwin Sandys, treasurer of the Virginia company, that he obtained a grant of land in North America.

William Brewster was a ruling elder of the Plymouth church and until 1629 acted as minister and teacher. When he died in 1644, the inventory of his belongings included separate listings of his Latin and English books totalling nearly 400 titles. The chest below is on display at the Pilgrim Hall Museum in Plymouth and is said to have been brought on the Mayflower by Brewster. 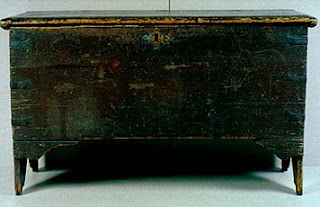 Another of my 10th great grandfathers is Francis Cooke. Born about 1583, his English origins have not been discovered. Some think he was from Norwich or Canterbury. He lived in Leiden where he married Hester le Mahieu July 20, 1603. She is said to have been a French Walloon (protestant) whose parents had earlier fled to Canterbury. Their marriage occurred six years before the Pilgrim Church had moved to Leiden. The Cookes returned to Norwich, England for some time but returned to Leiden to have their first son baptized at the French church there.

Francis and his oldest son, John, sailed on the Mayflower. Hester and their other children Jane, Jacob, Elizabeth and Hester came to Plymouth in 1623 onboard the ship Anne. Francis lived a long life dying at about 80. His wife survived him by at least 3 years.

My 8th great grandfather Edward Doty was not among the religious separtists who sailed on the Mayflower. His English origins are still unknown. He is believed to have been born between 1597 and 1602. He came on the Mayflower as a servant to Stephen Hopkins and was still a servant in 1623 when the land was divided. He signed the Mayflower Compact so he was probably 18 to 21 in 1620. Nothing is know of his first wife. He married Faith Clarke who came on the ship Francis in April 1634 with her father Thurston Clarke.

Doty has the reputation of being a troublemaker in Plymouth. He fought a sword and dagger duel with another Hopkins servant Edward Leister. Both were wounded. They were sentenced to have their feet and heads tied together for an entire day but were let out after an hour because of their "suffering".

Stephen Hopkins, my 10th great grandfather, led a very interesting life. Proven descent from Stephen can get you into the Mayflower Society as well as the Jamestown Society. From Hampshire, England, he married his first wife Mary in the parish of Hursley. They had three children Elizabeth, Constance and Giles. Hopkins sailed in the ship Sea Venture bound for Jamestown as a minister's clerk. Unfortunately, the ship was wrecked at Bermuda. The surviving crew and passengers were stranded on the island for ten months eating turtles, birds and wild pigs.

Six months into this life as a castaway, Stephen and several others organized a mutiny against the ship's captain. The plot was discovered and Stephen was sentenced to death. Pleading with sorrow and tears, he begged for mercy as his death would ruin his wife and children left behind in England. Eventually, the castaways built a small ship and sailed to Jamestown. It is unknown how long Stephen stayed in Jamestown.

Meanwhile in England, Mary Hopkins died and left a probate estate which mentioned their children by name.

Stephen married Elizabeth Fisher in England in 1617. Their first child Damaris was born about 1618. The entire family sailed on the Mayflower. The others treated him as an expert on Native Americans as he had met some of them in Jamestown. Stephen died in 1644 leaving a will and naming his children. Below is his signature

Recently, I discovered another Mayflower passenger who is my 11th great grandfather, Richard Warren. He was born about 1585 in county Hertford, England. He married Elizabeth Walker April 14, 1610 at Great Amwell, Hertford. 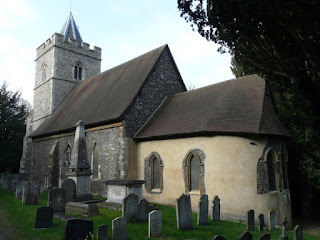 Not much is known about Richard's life in America. His wife and five daughters came on the ship Anne in 1623. In Plymouth, they added two sons. All of the Warren children survived to adulthood, married and had large families. At his death, it was written, "this year (1628) died Mr. Richard Warren, who was an useful instrument and during his life bare a deep share in the difficulties and troubles of the first settlement of the Plantation of New Plymouth."

I am thankful that this group of people, bound by a common experience, braved the ocean voyage and a new, unknown land. I wonder if I would have been as brave.