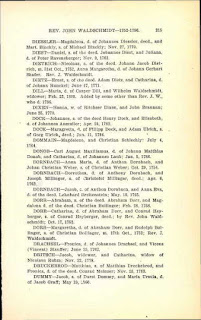 In the process of celebrating March as Women's History Month, attention turns toward one of my ancestors who, during the Revolutionary War, helped our fledgling country. Magdalena Dommain was the wife of Christian Schelchty (here is our descent - Betty Werst daughter of Cecil Werst, son of Lewis Werst, son of George Werst and Elizabeth Puderbaugh, daughter of Jacob Puderbaugh and Magdelene Schlechty, daughter of Christian Schlechty and Barbara Biery, son of Christian Schlecty and Magdalene Dommain).
The image at left is from the Baptismal and Marriage Records, Rev. John Waldschmidt: Cocalico, Moden Krick, Weisseichen Land and Seltenreich Gemeinde Lancaster County, Pennsylvania, 1752 - 1786.
Published in the Pennsylvania Archives; Sixth Series, Vol. VI, Edited by Thomas Lynch Montgomery, Harrisburg, PA, 1907.
At that time, Moden Krick or Muddy Creek was a German Reformed Congregation (German in terms of language usage as Germany did not yet exist as a nation).
Magdalene's husband Christian was born in either Switzerland or Germany. There is some doubt as to Magdalene's heritage. At least one researcher has a pedigree chart handed down from a great-aunt who identifies Magdalene as an "Indian girl".
Widowed in 1777, with at least one young son to support on the farm, Magdalene was also able to meet her financial obligations and support the Revolutionary cause by paying her supply taxes in both 1779 and 1789(PA ARCH, 3 Ser., vol. 18, P 175, 236).  She is DAR (Daughters of the American Revolution) Ancestor #A002160.