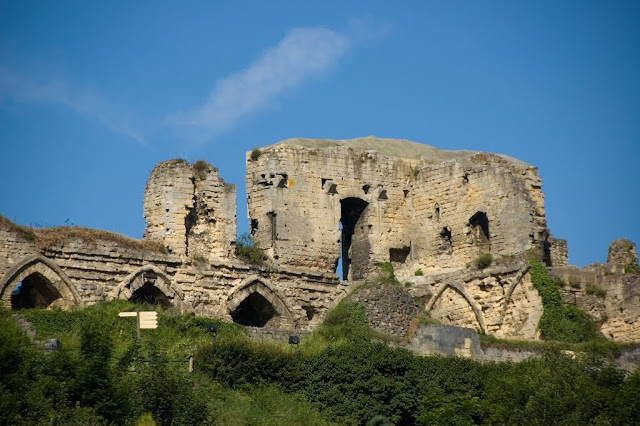 Talking with my sister Trude the other from Amsterdam, she asked about our Dutch ancestry so I thought I would share some information about the Van Valkenburg(h) surname. Translated from the Dutch, the surname means from the castle of the falcons (The image above of the ruined castle above Valkenburg is from google earth).  Valkenburg is near Maastrict in the Limburg Province of the Netherlands. This territory has been the property of Holland, Germany, Belgium, and Spain but our ancestors identified themselves as Dutch. No direct connection has been established between our Van Valkenburg ancestors and the Dukes of Brabrant who owned and still own the castle. I expect it was the most famous area in the region of their birth so they adopted it as there surname.
My 11th great grandfather, Andries Van Valkenburg died in Millen, Limburg Province, Netherlands in October of 1609. Today Millen is across the border in Germany. His grandson, Lambert Jochemse (means son of Jochem) Van Valkenberg married Annetie Jacobs in Amsterdam in 1642. Record of the marriage is translated on the National Association of the Van Valkenburg(h) Family's website; "Appeared (before the marriage council of Amsterdam) as before (on the 4th of January, 1642) Lambert Van Valckenburgh, from Millen, 26 years old, having no parents (anymore) living on the Boomstraat, and Annatje Jacobs, from Tonningen (Schleswig Holstein) living as before, having no parents, 20 hears old, requesting to have their three Sundays banns proclaimed, in order to have their marriage solemnized and celebrated, insofar no legal impediments occur. And after their having declared to each other in blood, which would prevent a Christian marriage, their bans have been granted." Note; this translation of the banns of marriage was furnished to The National Association of the Van Valkenburg Family in America by Dr. Kenneth L. Marsi of Long Beach, California.
Boomstraat (meaning tree street) is in the Jordaan (or garden) area of old Amsterdam not far off the Prinsengracht (most visitors to Amsterdam know the Prinsengracht because it is the location of the Anne Frank House). Trude lived in this area when she first came to Amsterdam. She always said that she felt as if she had lived there before... perhaps that feeling was genetic memory from her 9 times great grandparents.
I have not found an immigration record for Lambert and Annetje but it must have been before 24 Jan 1644 when Lambert van Valckenborch is cited in a declaration regarding the propert of Peter Livesen found in the Register of the Provinicial Secretary, Vol. II. According to the Van Valkenburg(h) Family Association website (www.navvf.org), Lambert purchased a house and 25 morgens or acres from Cornelis Jacobsen Van Vreelandt on the west side of the Bowery from Canal to Broome Streets on July 29, 1644. On Febrauary 16, 1647, he acquires a grant from the Dutch West India Company to a lot south of the fort next to Jan Evertsen. He continues to prosper in New Amsterdam (now New York) and on May 15, 1649, Director General of the New Netherland Colony, Peter Stuyvesant, grants Lambert 50 acres of land embracing what today would be nine city blocks in New York City (on the west side of Lexington Avenue from 29th to 35th Streets extending west across Park and Madison Avenue beyond 5th Avenue from 31st to 33rd Street including the site of the Empire State Building. One can only imagine the comparative wealth of the Van Valkenburg's if he and his descendants had held on to the property.
Lambert moved onto Beverwyck now Albany, New York selling his property to Claes Martensen van Rosenvelt, the ancestor of both Teddy and Franklin Delano Roosevelt.
Our descent from Lambert is as follows: Cecily; daughter of Betty Lorraine Werst; daughter of Ada Grace Colby; daughter of Mamie Elizabeth Hugunin; daughter of Van Eps Hugunin; son of Richard Hugunin; son of David Huguenin and his wife Christina Van Valkenburg; daughter of Pieter Van Valkenburg, Son of Lambert Jochemse Van Valkenburg; son of Jochem Lambertse Van Valkenburg; son of Lambert Lochemse Van Valkenburg; son of Lambert Andrieskense Van Valkenburg; son of
Andries Van Valkenburg.
By the way, the National Association of the Van Valkenburg(h) Family will be holding it 42nd annual reunion in Chicago at the Key Lime Cove Family Resort Aug. 9-11th. Next year the reunion will be in Lake Tahoe. It would be fun to meet other descendants of Lambert and company.