Finding Family in the 1940 Census 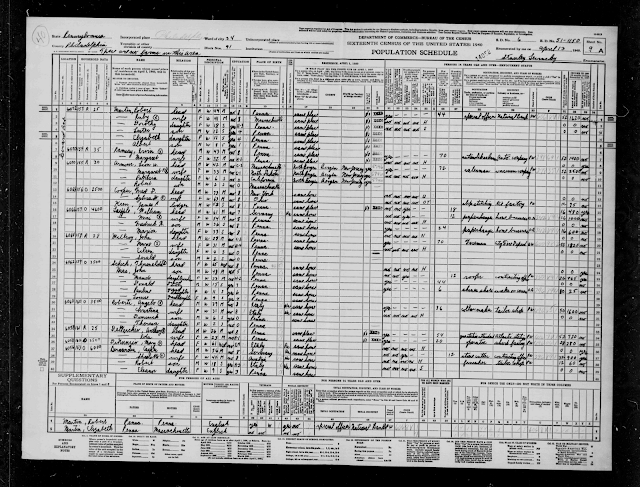 With the National Archives release of the 1940 census yesterday, the hunt is on to find family members in the census. Since the census has not yet been indexed, it is easiest to find those who are in the same place as they were in the 1930 census. Here is the census record for Ed's mother, her siblings, parents and paternal grandmother. Thusnelda Schick is listed as the head of household at age 65, Widowed. The Census lists her as having been born in Pennsylvania but she was actually born in Switzerland.
Living in the household are her son John Haas at age 48 who works as a roofer for a contracting office. His wife Maude, age 33, with no occupation. Their children Donald, age 15, who though attending school also works shining shoes, and daughters Pauline age 11 and Louise age 9 who are attending school.
The family is living at 6062 W. Girard Avenue, the same house where they lived until John Haas aka "Pop Pop" lived until he died.

The photo above is how the 3 bedroom, one bath house looks today. It must have been crowded with six people living there in 1940. I never thought to ask Pauline about the sleeping arrangements. Pauline Nelda was named for her grandparents Thusnelda and Paul Schick. Paul died on 24 Apr 1939, just about a year before this census was taken 13 Apr 1940.
It will be much harder to find Ed's father and his family in the census as their financial situation forced them to move frequently.
Posted by Cecily Cone Kelly, One Bad Apple Genealogy at 8:01 PM