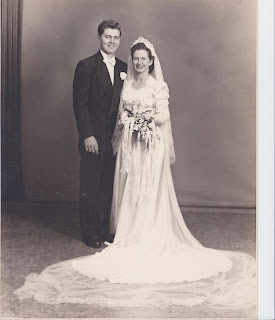 I hope April 25, 1947 was a beautiful spring day in Philadelphia. This young couple certainly looks happy and full of hope and they deserved to have a beautiful day for the wedding.

Edward Ebert Kelly was born in Philadelphia 03 April 1926 to William Joseph Kelly and his wife Alice Mae Hanna. The 5th child and 2nd son in the family, Eddie was supposed to have been named after his maternal grandfather, Edward Everett Hanna, but someone made a mistake on this birth certificate and he became Edward Ebert.

Eddie's father William Joseph Kelly had been born into a family of liquor merchants, or at least they had been liquor merchants until prohibition. William started his career as a shipbuilder at "Hog Island" in Philadelphia and felt confident enough in his position to marry 17 year old Alice Mae Hanna. Unfortunately, the shipbuilding was ended by post World War I negotiations, so William became a tapestry weaver. He was killed in 1939 when Eddie was about 13.

William's daughter, Marie Kelly Beaumont, used to relate that everyone in the family had to work to try support the family after her father's death. Aunt Marie said the family moved frequently because they could not afford to pay the rent. She left the impression that Eddie quit school and went to work but he states he had "4 years of high school" when he enlisted in the U. S. Army on 21 Jul 1944. He lists his occupation as a pressman and "plate printer" probably at the Philadelphia Bulletin newspaper.

Eddie was never sent overseas. He spent his tour of duty at Fort Ord, Monterey County, California. When we were stationed at Naval Post Graduate School in Monterey in the 1970s, Pauline visited and commented on what a beautiful setting it had been for an army base.

Ed was back in Philadelphia in late 1946. We assume he went back to work for the Bulletin and evidently had saved enough to get married by Apr. 1947.

Pauline was the first daughter and second child of John Haas and Maude Hannah Stump.  She was born in April 1928 and grew up in the multi-generational home of her paternal grandmother and step-grandfather Paul Schick (shortened from Schickendantz) and Thusnelda Hoffman Schick. Thusnelda had been born in Switzerland and Paul's father and mother were from Germany. She was named Pauline Nelda for her grandparents. Paul was a conductor for the street cars in Philadelphia.

Pauline was a bright young woman who competed and won a place at the prestigious Philadelphia High School for girls. She graduated from Girls' High in 1946 and got a job in a bank.

I hope someone in the family remembers the story of how their parents met. Sadly, my husband does not. They lived in the same area of West Philadelphia. Church can be ruled out as Eddie had been raised Catholic and Pauline was a Methodist.

The couple had five children, Edward William, Russel Allan, Patricia Ann, Robert Stephen (deceased), and Doreen Lynn. Unfortunately, their marriage only lasted ten years. However, today we celebrate the hope of 65 years ago and the four children, 6 grandchildren, and one great-grand-child they left behind.