When we last left Laurens Duyts, he had been flogged, had his right ear cut off and had been banished from New Amsterdam for 50 years. His wife and girl friend had both been stripped naked to the waist and publicly whipped. Things are not looking good, to say the least.

How did Laurens Duyts find himself in this predicament?

Here's what may have happened. Ytie and Laurens married in Amsterdam shortly before sailing for the new world. They became parents of three children Margariet born 1639, Jan Laurenszen, born 1642, and Hans Laurentzen born 1644. Each of the children was baptised in the Dutch Reformed Church. By 1658, Laurens is 48 and Ytie about 38. Their children, even the youngest, would have been considered adults.

Divorce was rare and largely illegal. Perhaps, the four individuals involved had decided to change their living arrangements, thinking that no one would be the wiser. Unfortunately for all concerned, Laurens talks to Pieter Jansen Noorman about leasing some land. We do not know whether Laurens or Pieter initiated the discussion. Turns out Pieter had already leased the land to Hermen Barensen and was suing him for failure to pay the rent.

In the Court Minutes of New Amsterdam in 1658 we find,


“Pieter Jansen Noorman, pltf, v/s Hermen Barensen, deft. Pltf. Says he hired his land to the deft. For the time of six years for which the deft. shall pay rent for the first year fl. 250. And every year after fl. 200 to the end of the lease according to contract exhibited in Court, but that the deft. Has not fulfilled the contract. Deft. Answers he leased the land from the pltf., when the grain was standing and he could not examine it and he afterwards found, that the land was nothing else than rocks and stone and could not make that money of it, and aided the pltf. 15 days; also that he the pltf., leased the land again for fl. 600 for four years, being willing to prove it. Pieter Jansen is asked if he has hired the land again? Answers, he has partially agreed with Lauweren Grootshoe, but has not included as he wants fl, 300, a year and Lauwerens will not give more that fl 200. The Court orders the deft. Hermen Barensen to prove on next Court day, that the plft. Pieter Jansen has re-leased the land." (The Records of New Amsterdam from 1653 to 1674 Anno Domini, edited by Berthold Fernow, The Knickabocker Press 1898).
I have not found a resolution to this case but Laurens Duyts and company are shortly hauled before Peter Stuyvesant for their punishment. Perhaps, officers of the court came looking for Laurens in regard to the case and discovered his living situation.
On December 12, the court responding to the petition of John Parcel and Ytie, “two sorrowful  sinners,” for pardon and leave to marry, it was ordered that they might remain three months to settle their affairs, but must separate from each other at once. (Dutch New York by Esther Singleton, Ayer Publishing, 1968, page 216.
What exactly happened to Ytie is lost to the annals of time. But Laurens' is one of the first marriage records in the Bergen Dutch Reformed Church in what is now Jersey City. On 1 Jan 1666,  he marries Grietje Jans (perhaps the sister of Ytie Jans) and perhaps the "other woman" from so long ago.  The church was founded in 1660 after Laurens had been in New Jersey for more than one year. Perhaps it took six years for the church members to forgive his early trespasses. 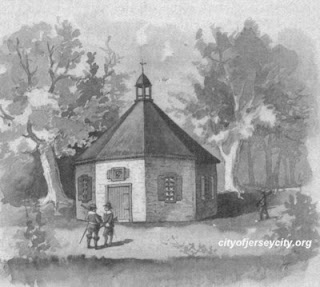 This illustration of the type of building that might have first housed the Dutch Reformed Congregation of Bergen from www.cityofjerseycity.org
Some of the answers to the situation may lie in the translation of Court Records from the 17th century Dutch. Wouldn't it be great to have a look at the original documents.
Perhaps Laurens really was a sconderel, but perhaps he was just "pursuing happiness."
He died in 1668 and is buried in the old church burying ground. If he had a headstone, it has not survived. 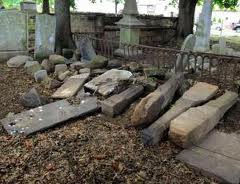