November 21st, 2015 the 395th anniversary of the Mayflower Compact.

Dear Grandparents,
Thought I would up date this blog post that I originally wrote in 2013. Today, November 21st, 2015 is the 395th anniversary of the signing of the Mayflower Compact. It was among the first written documents establishing the fundamentals of democratic government in the colonies.

As we begin to prepare for our annual commemoration of Thanksgiving, my mind has been turning to those of you who made Mayflower's historic voyage from England to Massachusetts. What courage it must have required to board that tiny ship leaving every place you had ever known behind! I hope I would have had the courage to join you.

We often focus today on the feast of Thanksgiving you hosted with the Indians and many forget some of the other contributions made by the settlers at Plymouth. We've read about the religious congregation from Leiden and probably most of us think of you as one group. I wonder if you realize that you are often referred to as the "Saints" and "Strangers." I think the implication being that the "Saints" were members of the Leiden congregation and the "Strangers" were the other English families who were hoping for more opportunities in a new land.

What foresight it took to understand that you needed some rules to govern the expectations and behaviors of the community before it was established ashore. I wonder how many of us would have come to that realization. 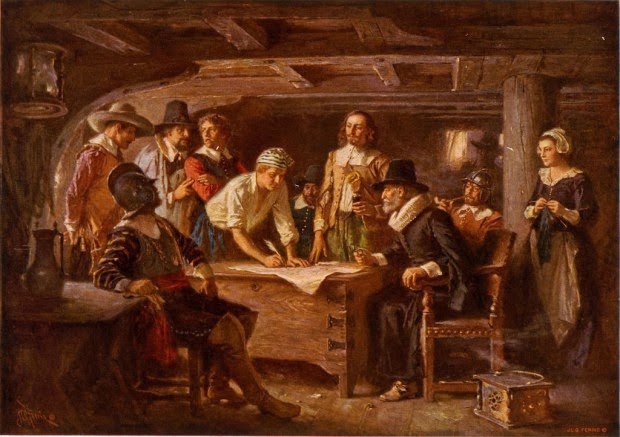 IN THE NAME OF GOD, AMEN. We, whose names are underwritten, the Loyal Subjects of our dread Sovereign Lord King James, bu the Grace of God, of Great Britain, France, and Ireland, King, Defender of the Faith, &c. Having undertaken for the Glory of God, and Advancement of the Christian Faith, and the Honour of our King and Country, a Voyage to plant the first Colony in the northern Parts of Virginia; Do by these Presents, solemnly and mutually, in the Presence of God and one another, covenant and combine ourselves together into a civil Body Politck, for our better Ordering and Preservation, and Futherance of the Ends aforesaid; And by Virtue hereof do enact, constitute, and frame, such just and equal Laws, Ordinances, Acts, Constitutions, and Officers, from time to time, as shall be thought most meet and convenient for the general Good of the Colony; unto which we promise all due Submission and Obedience.

IN WITNESS whereof we have hereunto subscribed our names at Cape-Cod the eleventh of November, in the Reign of our Sovereign Lord King James, of England, France, and Ireland, the eighteenth, and of Scotland the fifty-fourth, Anno Domini; 1620.

*I have bolded the names of my ancestors who signed the compact.

There were women on board the Mayflower though they were not included in the affirmation of the compact they were certainly expected to live up to its requirements.

The transcription of the Mayflower Compact 1620, as well as the signatories, comes from the General Society of Mayflower Descendants Website. Commonly referred to as the Mayflower Society, it is an organization of those who prove their descent from one or more Pilgrims. It is estimated that there may be as many as twenty million descendants of the 102 hardy souls who sailed on the ship including nine American Presidents. My Great Grandfather Frederick Naaman Cone was a member of the Society, as was his son William Laurence Cone.

For family members, we can trace our linage to William Bradford, William Brewster, Steven Hopkins and his son Giles Hopkins, and Edward Doty (who's name was written at Doten on the compact).

Thank you for your bravery, foresight and spirit. I want to tell more of your stories before Thanksgiving.