For the second time, I've been lucky enough to find an obituary in a trade journal. Who knew that the brick making industry in 1900 had a journal called "The Clay Worker" that was international in scope? Theodore Randall began publishing the journal in 1884 and continued for more than 40 years. It was just the place to find information on Ed's ancestor who had a brick making business in Philadelphia for many years. 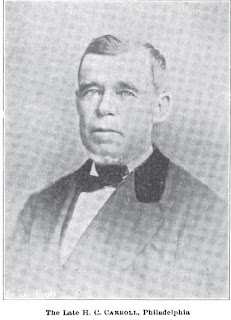 The December 1900 issue included an obituary for Henry C. Carroll including the information that he had immigrated from Ireland with his parents when he was 15. Of course, I would have preferred to know from where in Ireland they immigrated but the time frame does provide an additional clue. For family members here is the connection; Edward Kelly son of Edward E. Kelly son of William J. Kelly, son of John J. Kelly and his wife Mary Gertrude Carroll, daughter of Michael Carroll and his wife Sarah Riley, son of Henry C. Carroll and his wife Margaret Summers.
Henry was the founder and proprietor of the H. C. Carroll & Sons Brickworks  in Philadelphia. His sons Michael, Eugene and Peter took over the business from their father.
Posted by Cecily Cone Kelly, One Bad Apple Genealogy at 6:06 PM