Yesterday Ed and I had the opportunity to reconnect with one of his first cousins Dan Foley and his wife Judy. Dan provided us with some very special photographs of Ed's father and their mutual Kelly grandparents. 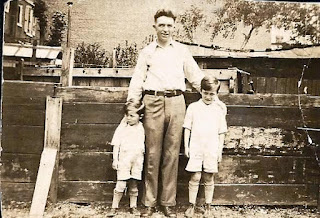 Above is Grandfather William Joseph Kelly with sons Edward Ebert Kelly on the left and William Joseph Kelly, Junior. The photo is captioned, "May 19th 1929 at 5326 Westminster Ave. Eddie (3), Dad (33), Billy (7). This is the first photograph of his grandfather that Ed had ever seen. William J. Kelly died 17 Sep 1939 under circumstances that have been the subject of debate in the family. We've ordered a copy of his death certificate so hope to have the issue resolved in a few weeks. 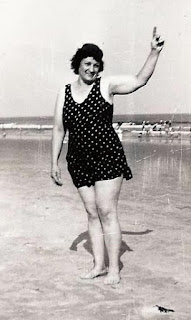 This photo is Alice Mae Hanna Kelly, Ed's grandmother and wife of William Joseph Kelly. The only caption on back reads "Mom". The photo was most probably taken at the New Jersey shore in the late 1940s or early 1950s.

When her husband died in 1939, Alice was left with six children, ages 20 to 9 and little means of support. Everyone went to work to support the family and try to keep the younger boys in school. It must have been a difficult time.

Thank you Dan, we feel so lucky to have the photos.