When I realized that my fourth great-grandparents William McCowan and Hannah Lort Viguers were buried at Evergreen Cemetery in Camden, I did some research to locate the cemetery. What I learned was quite disturbing. On-line accounts of visiting the cemetery over the last ten years related shoulder high grass and weeds and a dangerous urban environment. Evergreen Cemetery was bankrupt and in receivership. The recommendation that one only visit in groups of 10 early on winter mornings was particularly disturbing.

It was with quite a sense of trepidation that we decided to visit the cemetery on a sunny spring morning. We were pleasantly surprised to find a crew of mowers tending to the grounds that had obviously been previously mowed within the last few months. They were able to direct us to the nearby Harleigh Cemetery for information. Speaking with Mark Jackson, their Family Service Counselor, we learned though the cemetery is still in receivership Harleigh is trying to keep the grass cut and has some records.

We had some good and some bad luck. Hannah Viguers McCowan was listed in the records at Harleigh. 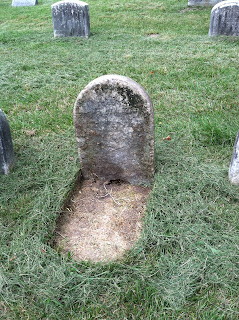 We were able to locate the Viguers plot with the map we were given. Following the time table of burials in the plot, we expect that the headstone above is Hannah's. Unfortunately, it is completely illegible and had been lying face down until we righted it.

If William McCowan is also buried at Evergreen, his record was not included in this plot.

Evergreen Cemetery is in a rough area in Camden, but we did not have any problems during our visit.

Posted by Cecily Cone Kelly, One Bad Apple Genealogy at 7:07 AM