My daughters Amanda and Colby designed this blog for me two years ago as a Mother's Day gift. The first post I made was in commemoration of the 83rd anniversary of my father's birth. It seems proper that two years later I mark his 85th birthday with another post about Charles Newton Cone, Jr.

One of the things Dad loved most, beside his wife and children, was the United States Navy. Born 8 Jun 1927, he would not normally have graduated from high school until 1945. He graduated from Grant High School in Portland, Oregon in May 1944. As he was an erudite and intelligent man, we always figured that he had skipped a grade. During my genealogy research, I discovered that he had actually accelerated his high school and finished in three years so he could join the U. S. Navy. He enlisted on 20 Jun 1944 at age 17 and was sent directly to boot camp at the Great Lakes Naval Training Center outside of Chicago.

At Boot Camp, he was selected to be part of the V-12 program at the University of Washington in Seattle. This program was similar to the Naval Reserve Officer Training Corps (NROTC) that exists to this day as a partnership between the Navy and universities to train and educate officers for service.
In those days, the naval reserve students wore uniforms to all classes and slept in a barracks barge on Lake Washington.

They could also participate in all student activities including joining a fraternity. Dad pledged and initiated into Alpha Tau Omega. 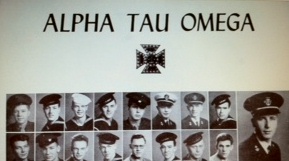 Charles Cone is eighth from the left in the top row clad in an enlisted seaman's uniform in the 1945 University of Washington yearbook.

Dad did two years at the University of Washington before encountering some difficulties. In the summer of 1946, he is a Seaman 2/C on board USS Graffias. This may have been a training cruise. That fall, he transfers to Oregon State College and joins their NROTC program. A fortuitous event for my siblings and me, as he met our mother there in January 1947. That summer he reports to the USS Iowa.

Charles N. Cone, Jr. was commissioned an Ensign in the U. S. Naval Reserve on 04 Jun 1948. His active and reserve career lasted more than 30 years, retiring as a Captain, Feb. 1988 in Charlotte, North Carolina. 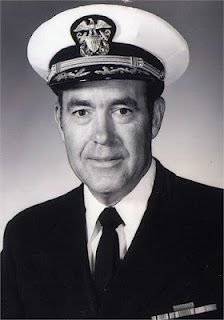 I've always liked the following quote of remarks delivered at Bancroft Hall at the United States Naval Academy in 1962,﻿

"I can imagine a no more rewarding career, and any man
who may be asked in this century what he did to make his
life worthwhile, I think can respond with a good deal of
pride and satisfaction:'I served in the United States Navy'
President John F. Kennedy

Today, we salute Charles Newton Cone, Jr's service and his birthday. We still love and miss you, Dad!
Posted by Cecily Cone Kelly, One Bad Apple Genealogy at 8:39 AM