Its St. Patrick's Day and our family is mostly clad in green to honor our Irish ancestors. Now, when I married a man with the surname Kelly, I figured that I would have to get my Scots, English, Welsh, Swiss and German self into the spirit of "the wearing of the green." Of course as the saying goes, "Everyone is Irish on St. Patrick's Day" so little did I know that I really did have Irish heritage.

This summer, while researching at the Pennsylvania Historic Society in Philadelphia, I sat down in the venerable reading area of the Society with a folder of McCowan family archives. Carefully, turning the crumbling sheets to the first page I read, "My name is William McCowan and I was born in Duncannon, County Tyrone, Ireland." There was my very own Irish ancestor on my paternal Grandmother Hazel Bynon Allen's side! She always thought of her background as Scots and I imagine that the McCowan's were Scots-Irish. I am still looking for information on the family in County Tyrone.

I expect that there may be Irish on my mother's side as well. After visiting Belfast last fall, I was impressed by the number of surnames that I would have before considered to have been English that were clearly also Irish. My maternal 3rd great grandmother Nancy Carr might be Irish. My great grandmother Mary Jane Barnes, daughter of Simpson Barnes also might have Irish ancestry.

My husband's paternal side is nearly solidly Irish. His family tree is populated with Hannas, Carrolls, Rileys, Summers, O'Donalds, Coles, etc.  The Irish are not restricted to just his paternal ancestors, his maternal great grandmother is Ella Murray.

I think when my family was planning our trip to Ireland last year, my son-in-law was humoring me when I told him that I thought I would be able to find an Irish ancestor for him also. But then shortly before we went I found the Copeland family on his paternal grandmother's side. 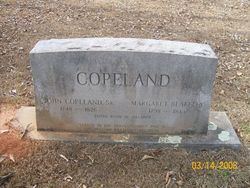 This is the headstone of his sixth great grandparents John Copeland Sr. and his wife Margaret Blakely, from the Duncan Creek Presbyterian Church Cemetery near Clinton in Laurens County, South Carolina contributed by Tracker to http://www.findagrave.com/cgi-bin/fg.cgi?page=gr&GSln=Copeland&GSfn=John&GSby=1748&GSbyrel=in&GSdy=1826&GSdyrel=in&GSst=43&GScntry=4&GSob=n&GRid=9445892&df=all&
The headstone clearly reads "both born in Ireland." This is a bonus ancestor for Chris as John Copeland Sr. is also a proven Revolutionary War Patriot who served as a Lieutenant from the Laurens District of South Carolina.

So, dear grandparents, we know some of you were of Irish descent and we would be happy to have more of you step forward and let us know your Irish origins.