Because March is the birth month of both my son-in-law Chris and his father Tim, I decided that today's Surname Saturday  should feature their surname PROPES. Most researchers believe that Propes is probably a derivation of the German surname Probst. We have not yet discovered the immigrant ancestor for the Propes.

The first of this Propes family to emigrate to Texas was John Alexander Propes. He was born 29 Mar 1840 (another March birthday) near Gainesville in Hall County, Georgia, the second of nine sons and one daughter born to Nicholas R. Propes and his wife Mary Wilson. Hall County is about 50 miles northeast of Atlanta.

John enlisted as a private in Company F of the 43rd Georgia Infantry on 10 March 1862 (another March date). As did his brothers Rufus Clark Propes and Richard W. Propes. Richard was killed 31 Oct 1862 in Paris, Bourbon County, Kentucky leaving behind an eighteen year old widow Sarah J. Carroll and their infant daughter Mary Ann Propes. The surviving brothers are absent in the regimental muster of November 1862. One can imagine that they took their brother's body home to Hall County for burial before returning to their unit.

J. A. Propes Company Muster Report
November and December 1862
Listing him as absent.
(www.fold3.com link to his service record)
﻿
Rufus and John were captured by Union troops at Vicksburg 06 Jul 1863, and after signing pledges to "Not take up arms against the United States" again they went back to George for thirty days leave and then rejoined their unit. Rufus was taken ill and left the 43rd Georgia Infantry for good July 1864. John continued to serve and surrendered with his regiment 26 Apr 1865.

Their father Nicholas R. Propes listed his birth place as North Carolina on both the 1870 and 1880 Federal Censuses. His birth year fluctuates from 1814 to 1817. 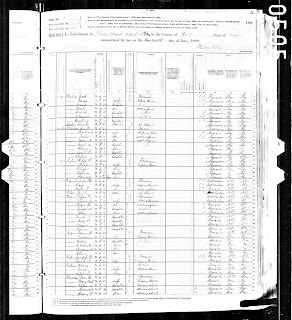 1880 Census from www.ancestry.com
We are not certain of the identities of Nicholas R. Propes parents. We think that he was born and married to Mary Wilson in North Carolina. His first child, Rufus Clark Propes was born there. He moved to Hall County, Georgia between Rufus' birth 26 Apr 1838 in North Carolina and John's birth 29 Mar 1940 in Hall County. I am still looking for a baptismal or marriage record in North Carolina.
There is a Nicholas Propes listed as Head of Family in the First Census of the United States (1790) in Shenandoah County, Virginia. Unfortunately, there is not yet a way to tie the two Nicholas' together.
The search continues....
Cecily Cone Kelly
﻿
﻿
Posted by Cecily Cone Kelly, One Bad Apple Genealogy at 6:19 PM