Dear Grandmother Sarah,
In twenty-first century America, we have set aside March to celebrate "Women's History Month."
It is a time for remembering the women who went before us, over came obstacles and made a difference to their family, friends and country. Today, as I was reviewing those shaking leaves at www.ancestry.com, I discovered yours is a story that should be told.

Generally when I have reported the stories of our family's immigrant ancestors, they have been the stories of men. Today, I am pleased to share your story. My research show that you were the daughter of Thomas and Francis (Bowling) Bryan or perhaps Bryant, born in England about 1606. You were married to Sylvester Baldwin about 1620. From my studies, I believe that you lived at Saint Leonard's near Dundridge on "Chapel Farm".  According to "Historic Homes and Institutions and Genealogical and Personal Memoirs of Worcester County, Massachusetts", Ellery Bicknell Crane, editor, published by The Lewis Publishing Company of New York and Chicago in 1907; you and Sylvester were the parents of nine children, of whom six survived, all baptized at Aston-Clinton:
Sarah, baptized April 22, 1623 married, 1638, Benjamin Fenn of Milford, Connecticut
Richard, baptized August 25, 1622 married 1642, Elizabeth Alsop of New Haven
Mary, baptized February 28, 1624, died in 1624
Mary, baptized February 19, 1625, married 1640, Robert Plum of Milford
Martha, baptized April 20, 1628
Ruth, born 1630
Samuel, baptized January 1632, died in 1632
Elizabeth, baptized January 23, 1633, died in 1633
John, born in 1635

I do not know why you and Sylvester decided to move with your family to New England. Sylvester was a man of property, respected by his Uncle Richard Baldwin who named him executor of his estate. It does not seem as if you were religious refugees like so many of my other ancestors. It must have seemed to be a daunting voyage with children ages 16 to 3. It must have been difficult to keep them safe and occupied on a voyage that took at least six weeks. After three days, my daughters would have been asking "are we there yet?"

We know that you sailed on the ship "Martin" because of the tragedy that Sylvester was taken ill.
He must have known for a while that he would not survive as he wrote or dictated his will which was made 21 Jun 1638. I can only imagine the panic you must have felt, watching your husband die, thousands of miles from your home, enroute to a place you had never seen. Did you know your husband so well that you encouraged him to make his will? How long did he live after the will was drafted? I assume he was buried at sea.

The Martin is supposed to have arrived in Boston about 13 July 1638. You and son Richard were appointed executors of Sylvester's estate when the will was proved before Deputy Governor Dudley.
History shows that you and the children with the exception of Richard went on to New Haven as had been planned. I wonder if there were any pleas from the children to return home to England.

Edward Elias Atwater wrote in his book "History of the Colony of New Haven to Its Absorption Into Connecticut", printed by the author in 1881 and available from Google books, that "According to the schedule of 1641, the proprietors of the south-west square were, at that time, William Fowler, Peter Prudden, James Prudden, Edmond Tapp, Widow Baldwin, An Elder, Richart Platt, Zachariah Whitman, and Thomas Osborne (page 137). 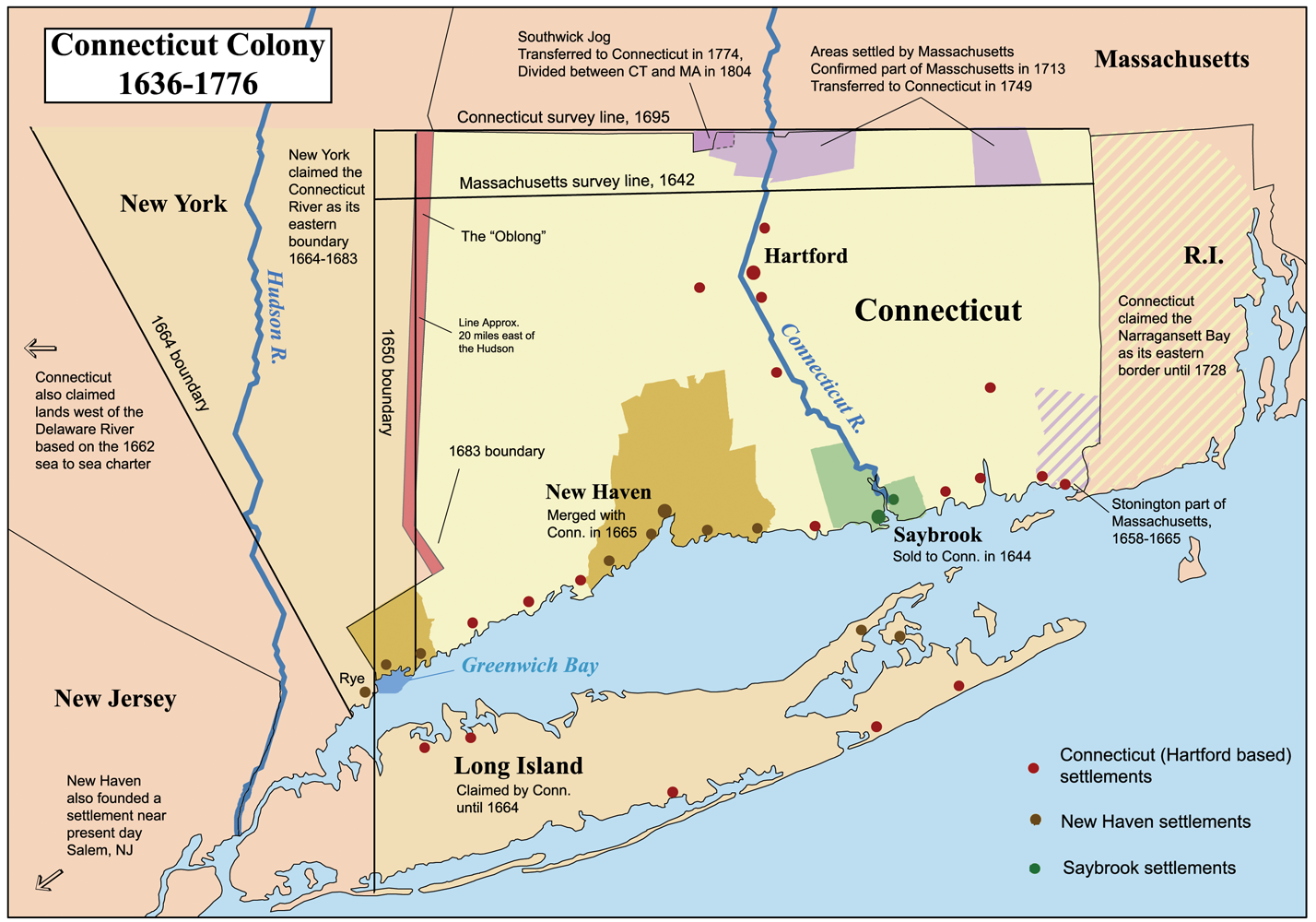 Darkened area shows the New Haven Colony which merged with Connecticut in 1665
(map can be found at www.familysearch.org)
﻿

As your children settled into their new lives and married, you found another opportunity for happiness and married about 1643 Captain John Astwood a "husbandman from Little Hadham, Hertfordshire, England". He had arrived in Boston in 1635. He is listed as a freeman on the Massachusetts Colony census on 03 Mar 1636. Always ready for another adventure, you and your husband and most of your children removed to Milford. Your son-in-law Benjamin Fenn (and an Alexander Bryan - perhaps a brother or nephew) was among the men who purchased Milford from the local tribes for "six coats, ten blankets, one kettle, twelve hatchets, twelve hoes, two dozen knives and a dozen small looking glasses." 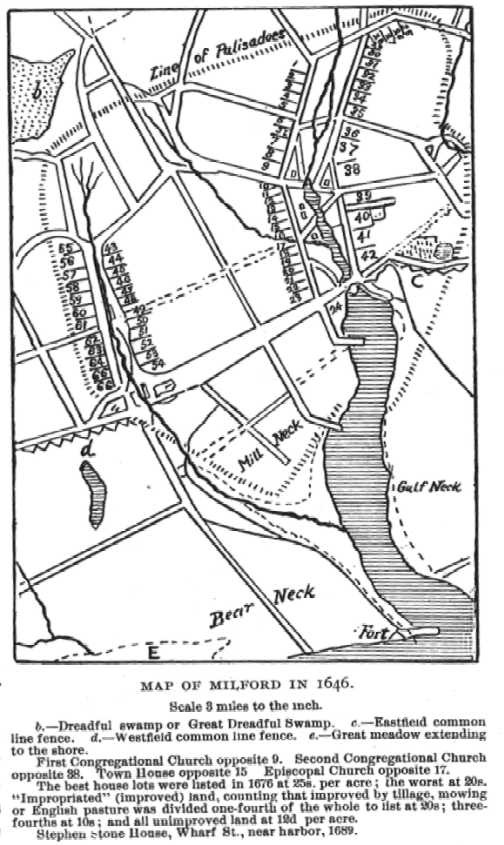 Map from Milford Connecticut Genealogy
﻿
The lot numbers may be too small to read but J. Astwood has lot #1, John Baldwin lot #13, Joseph Baldwin lot #52, Nathaniel Baldwin lot #7, R. Baldwin (presumably Richard) has lot #2, Tim Baldwin lot #22, son-in-law Benjamin Fenn lot #3, son-in-law R. (Robert) Plum lot #37. How nice it must have been for you to have all of your children nearby.
Alas, the fates were not kind to you. Capt. Astwood sailed back to England on business and died in London in 1653. You lived another 16 years in Milford among your family.  We know you were close to some of your grandchildren as you left them bequests in your will. We also think that you were literate as you left your daughter Mary Baldwin Plum a book entitled "The Soule's Conflict."
There is a memorial bridge over the Wepawaug River in today's Milford. I imagine you would be pleased to know that your name is among those memorialized there.

Photo from www.findagrave.comwww.findagrave.com
It was added by Nareen, et al 12 Jul 2008. She has
added more that 48,000 Memorials to the website.
﻿
The challenges you faced in your life truly earned you the right to be honored during Women's History Month.
Love,
Cecily Cone Kelly
One of your many 10th great grand daughters
P.S. for family members here is my descent from Sarah:
Cecily daughter of Charles Newton Cone, Jr.; son of Charles Newton Cone; son of Helen Brown Newton; daughter of Charles Shepard Newton, son of Reuben Newton and Caroline Beckworth Sanford; daughter of Stephen Sanford and Olive Woodruff; daughter of Andrew Woodruff and Miranda Orton; Andrew is son of Samuel Woodruff and Anne Nettleton; Samuel is son of John Woodruff and Sarah Baldwin, Sarah is daughter of Thomas Baldwin and Jerusha Clark; Thomas is son of Barnabas Baldwin and Sarah Buckingham; Barnabas is son of Elizabeth Alsop and Richard Baldwin; son of Sarah Bryan(t) and Sylvester Baldwin.
﻿
﻿
﻿
﻿
Posted by Cecily Cone Kelly, One Bad Apple Genealogy at 8:33 PM